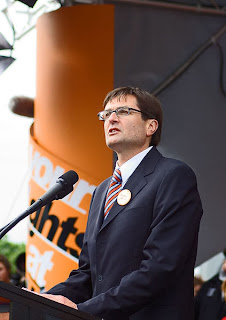 
The Minister, through a televised recording opened the Greenhouse 2011 conference and said Australia accepts the fundamental conclusions of science that human activity is causing carbon pollution leading to climate change.
Minister Combet says if action is not taken to reduce emissions, Australia’s climate is likely to change in ways that present grave risks to the economy, environment, and their way of life.
He says while the consensus the scientific community is clear, the consensus within the broader community is not clear.
Meanwhile in concluding his speech Minister Combet says robust science is vital to understanding, and therefore appropriately managing, the impacts of climate change.
The above photo of the Minister for Climate Change & Energy Efficiency was sourced from the Wikipedia website.
http://en.wikipedia.org/wiki/Minister_for_Climate_Change_and_Energy_Efficiency_%28Australia%29
No comments: 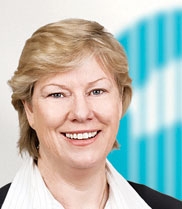 04 APRIL 2011 CAIRNS (ABC NEWS) The head of Australia's leading science body says a carbon price should be a key part of the nation's overall climate action.
CSIRO chief Dr Megan Clark will today join 600 of Australia's top climate change scientists at a meeting in Cairns to update the latest observations.
Dr Clark says global warming is one of the most challenging issues facing humanity and needs careful consideration.
"It's an urgent issue, but it is also a very complex one and one that will affect us, not just in this country, in all aspects of society, but probably one of the most challenging issues we have ever faced as humanity.
"
It does need careful consideration and it does need debate.
"We need to debate the issue, come to grips with the issue, and it's an important part of us coming to grips with it and stepping forward."
Dr Clark has welcomed the pro- and anti-carbon tax rallies, saying she is not concerned the science may be overlooked as the political battle focused on the carbon tax.
"Clearly we need a price on carbon and a policy response, but we also need sustainable technologies that will take us into a low-carbon future and also our change in behaviour," she said.
"We have put a price on water and we've seen efficiency changes of between 30 and 50 per cent in some areas.
"With water we've seen behavioural change in how we use that, so in a way we have already worked through it as a nation."
Despite recent criticism, Dr Clark says the CSIRO will continue to offer observations and clarity on the science of global warming.
"Our role as the leading science agency in the nation is very, very clear, and that is to make sure we provide to the community, to industry, to government and policy makers, that we provide clarity on the observations," Dr Clark said.
"We will continue to put forward that information and make it available for everyone."
Effects showing
Scientists from 14 Pacific island nations plus East Timor will also attend the climate conference in Cairns and share their latest research findings.
The islands of the Pacific are among those nations most vulnerable to the devastating effects of climate change, whether it is inundation caused by sea level rises or food shortages.
Ofa Fa'anunu, Tonga's director of meteorology says there is no doubt climate change is affecting the Pacific.
"We're starting to see some effects of especially sea level, some extreme weather events such as tropical cyclones, starting to show some more effects especially in low-lying areas," he said.
"In some of our smaller islands, [we're] seeing inundation from storm surges starting to become a problem. There are some other indications as well in how well the soil is doing for agriculture."
He says young people educated about science usually understand the technical explanations but older generations are more likely to be skeptical.
Dr Gillian Cambers, manager of the Pacific Climate Change Science Program, says scientific research presented at the conference should help to promote understanding.
"Global average temperatures since the mid-20th century - they've risen and that this is very likely due to the increase in carbon dioxide that's been generated by humans," she said.
"So our findings verify this. If we take the area of sea-level rise, it's already rising and it will continue to rise as we go into this century and continue to the end of the century.

The above of of Dr Megan Clark, Chief Executive and CSIRO Board member was sourced from the CSIRO website.  http://www.csiro.au/people/Megan.Clark.html
No comments:

31 March 2011 - Commonwealth Scientific and Industrial Research Organisation (CSIRO)
Representatives from 14 Pacific island countries and East Timor will attend the GREENHOUSE 2011 conference in Cairns next week to discuss regional and global climate change issues with some of the world’s leading experts.
Drawn mainly from their nations’ meteorological services, the region’s delegates will attend the conference as part of the Pacific Climate Change Science Program (PCCSP).
The PCCSP is a component of the Australian Government’s International Climate Change Adaptation Initiative, which is helping vulnerable developing countries meet high priority climate change adaptation needs.
“The PCCSP will provide scientific information to help decision-makers in the Pacific and East Timor better understand how their climate and oceans have changed and how they may change in the future,” says PCCSP Manager, Dr Gillian Cambers.
“This ‘underpinning’ science will then be used to support future adaptation decisions.”
Dr Cambers will present a keynote address on the final day of the conference (Friday, 8 April) entitled; Advancing climate change science in small tropical island nations – challenges and risks.
The Programme Manager, Pacific Futures, for the Secretariat of the Pacific Regional Environment Programme, Dr Netatua Pelesikoti, will discuss the role of climate science in informing climate change adaptation and disaster risk management decisions.
Each of the 15 nations will present research about their current climate at the conference.
The PCCSP is being implemented by the Australian Bureau of Meteorology and CSIRO through their partnership in the Centre for Australian Weather and Climate Research.
Media are invited to attend:
What:                         Australia’s premier climate change conference – GREENHOUSE 2011
When:                        4 - 8 April, 2011
Where:                      Cairns Convention Centre, Cairns, Queensland

The above photo was sourced from the CSIRO social network page within the photo album.
No comments: