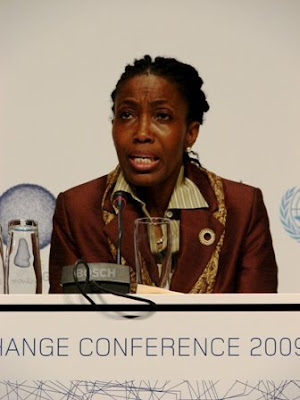 Copenhagen, 12 December - As negotiations reached their midway point at COP15, the pressure on countries to strike a fair deal before their Head of Sates arrive next week is intensifying.

Amongst these group of nations is the Association of Small Island States (AOSIS) that is trying to push for its ‘legally binding and ambitious’ proposal, called the Copenhagen Protocol.


AOSIS chair, Ambassador Dessima Williams admits that, “we cannot agree on everything.”

“We are group of 135 nations at the United Nations and we are so different in so many ways.

“But the AOSIS would like to see the continuation of the Kyoto Protocol and we call on the developed countries to honor their commitments under the Convention. We are unified in calling for an adequate response to climate change. It should commensurate to the damages we have suffered.

Ambassador Williams said most of her small vulnerable island nations seek adequate financing for the short and long term.

“For us, being adequate is really that it should be responsive to the damages done to our islands as a result of the impact of climate change.

“Some countries need a dose of reality here and our AOSIS proposal brings that, said Ambassador Williams.

Her sentiments were echoed by the chair of the Conference of the Parties, Ms. Connie Hedegraad who called for a ‘spirit of flexibility, compromise and reality’ as negotiators begin negotiations in earnest on the proposed draft text.

AOSIS represents 43 members and observers, many of whom are small island developing countries. Most of them are using the negotiation process of the Conference of the Parties to raise their specific vulnerabilities.

Tuvalu has been very vocal right from the start of the climate change talks here in Copenhagen, especially on its proposal to amend some provisions of the Kyoto Protocol.

Debate on Tuvalu’s proposed amendment was moved to Saturday for consideration by the Conference of the Parties on the Kyoto Protocol (COP) after its chief negotiator, Ian Fry refused to give in to pressures from India, Brazil and Saudi Arabia.

At the resumption of the plenary session on Saturday, COP President, Connie Hedegraad announced that ‘progress was being made but more consultations needed to be done.’


“We hope to come up with a consensus decision next week, said Ms Hedegraad.


Mr Fry commended the chair for her effort and asked that ‘Tuvalu’s proposal is not swept under the carpet.’


“We seek substantative discussion on our proposal. Let me clarify, Tuvalu’s position is to preserve the architecture of the Kyoto Protocol and we don’t want it to merge with another agreement.


“If our proposal is not adequately discussed than we consider that as a grave injustice. And we plead with the chair not to impose this injustice on us, pleaded Mr Fry.


Ms Hedegraad assured Tuvalu that its proposal will not be swept under the carpet.


India, China and Brazil oppose Tuvalu’s proposed amendments because they claim it calls for very specific emission reduction from them. The three countries are classed as major emitters from developing countries that are not required to commit legally binding emission reduction under the current Kyoto Protocol.


“It’s not an acceptable position and for the U.S that is the basic element of a deal here. Mr Stern said the mitigation aspect of the text is ‘unbalance.’

“We believe that developed and major developing countries must reflect their strong action in a new agreement.

“In the draft, developed nations shall take action, whereas developing countries may take action…It comes down to the difference between shall and may,” said Mr Stern.

The United States, he said does not deny its responsibility as the largest historical emitter of greenhouse gas emissions and it’s taking action to meet its legal obligations.

"But all the growth of emissions or 97 percent come from developing countries. This is not our figure but from the International Energy Agency in Paris. They need to step up too, said Mr Stern.

Most of the figures in the text are shown in brackets – meaning that there is not yet agreement on specific emission reduction targets. The draft states that emissions should be halved worldwide by 2050 compared to 1990 levels, but it also suggests at least 80 and 95 percent reductions by that year as possible alternative options. The other emission target is between 75-85 percent. All these figures are still in bracket and currently being negotiated.

On the call by AOSIS for global warming to kept below 1.5 degrees Celsius, the draft text mentions it must not exceed either 1.5 or 2 degrees (both in brackets).


Most Heads of the State will arrive in Copenhagen by the middle of next week with the hope that negotiators will come up with an agreement ready to be initialed.