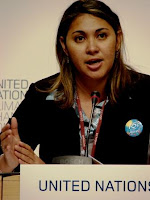 Samoas integrated approach to adaptation was featured at the United Nations Climate Change Conference in Copenhagen, Denmark this week. Anne Rasmussen (pictured), Principal Climate Change Officer for the Ministry of Natural Resource and Environment presented Samoas case today at the Global Environment Facility (GEF) address to the Conference. She said: "We are one of the very vulnerable contries, a small island state in the Pacific and we see this project as a very hands on, on the ground project that will help the people of Samoa adapt to climate change." Samoa signed Kyoto on the 16th of March 1998, and was accepted for ratification on the 27th of November 2000. Samoa submitted its first national communication to the United Nations Framework Convention on Climate Change in 1999. Anne says: "The Samoa story is that not only have we developed our NAPA, we have already done the plans, and identified the 9 projects, community driven. We are now

coming to see the implementation of these projects. The project integrated adaptation itno the agriculture sector and health." Samoa was one of the first countries to receive funding from the Global Environment Facility (GEF) under the Least Developed Country Fund to develop its National Adaptation Programme of Action (NAPA). After two years of information and data collection, as well as countrywide consultations, Samoa’s NAPA preparation project

reported the achievement of it's objectives. One such success included the realisation that climate change involved more than one sector. "We do not see climate change as just an environmental issue, it is a cross cutting issue and plans get passed on all other sectors. We see an integrated approach on all sectors as not only unique but important," Anne said.

The Global Environment Facility commended the efforts of Samoa in complying with terms of the funding and said islands should follow suit. The ‘Samoa Climate Change Synthesis Report: National Adaptation Programme of Action 2004’ also created links to other multilateral agreements like the the Convention on Biological Diversity (CBD), and the United Nations Convention to Combat Desertification (UNCCD). According to MNRE a nationally driven set of criteria for priorities in climate change adaptation has also been developed. MNRE reports that the development of Samoa’s NAPA was an good learning experience for all those involved, particularly the National Climate Change Country Team (NCCCT) and National Task Team (NTT). According to Rasmussen:"By adopting an integrated approach, all the relevant stakeholders both in government and non-government organizations have been able to work hand in hand to ensure that those whose livelihoods are most vulnerable to adverse impacts of climate change impart the urgency and immediacy of the adaptation needs."--ENDS