Seal the Deal in Copenhagen, it’s in the interest of the world, urges Ban Ki Moon

Copenhagen, 15 December- Three years of trying to get world leaders to the table to solve climate change have come down to three days of action.  And United Nations Secretary General, Ban Ki Moon is more than hopeful the presence in Copenhagen later this week of more than 120 world leaders will bring political leadership on a new global climate change deal.

“We have a chance, a real chance to change the course of our history.  Young people from all over the world are reaching out to us.  Show us change, they asked.  Show us leadership, is what the world is waiting with bated breath this week.  I am optimistic Copenhagen will come up with a fair and ambitious deal that the world wants.  It’s time to finish this job. A new era of hope is within our crescent. We have three days left to seal a deal!"

Mr Ban (below right) didn’t mince his words at the opening of the high level segment, when he said, “Stop pointing fingers and start making compromises. 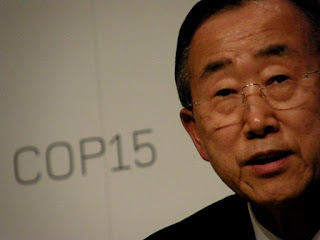 The President of COP15, Danish minister for the climate change negotiations, Connie Hedegaard was forthright in her description of the status of the negotiations.

“In these very hours, we are balancing between success and failure. Success is still within reach but as COP president, I must also warn you – we can fail!  Without showing her frustration with the pace of negotiations, Ms Hedegaard said, “we spent too much time on posturing, on repeating positions and on formalities”.

“If we are going to make it, and we are, then we must change gears. We can’t risk failure – that means the key word for the next two days must be compromise!"Ms Hedegaard pleaded with parties to turn divisions into decision.

“In the next three days we have a unique chance. We can choose between fame or shame or favour action over stalemate."

The five issues that need to be expedited in the coming three days – ambitious mid term mitigation targets from industrialised countries, action by developing countries to limit emissions growth below ‘business as usual’, an adaptation framework for all countries, financing and technology support and financing.  Mr Ban said the $10 billion committed as a fast start financing mechanism will not solve the challenges of climate change.

“We cannot leave here without an understanding of how we will proceed on this vital question.  We have come a long, long way. Let us not falter in the home stretch", said Mr Ban.

On Wednesday, most of the 120 world leaders will make country statements to the main plenary session, while negotiations will continue in the background, with the hope that one or two agreements will be ready on Friday for initialing.