Security tightens as Copenhagen prepares for world leaders next week 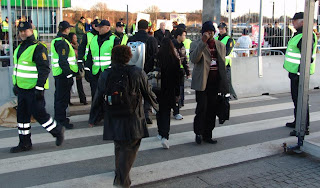 Copenhagen, 12 December - Tight security measures are now being imposed, as Copenhagen prepares for over 100 world leaders expected in the Danish city next week to initial a new global climate change deal.

Bella Centre, the venue of the Conference of the Parties (COP15) has a capacity of only 15,000 people and the UNFCCC secretariat is monitoring the level of  access.

“This is progressively moving towards the limit, said an announcement made in Saturday’s daily programme.  The secretariat said ‘additional measures’ regarding access will be put in place.  To facilitate this security measure, all inter governmental (IGOs) and non governmental organisations (NGOs) will be issued with secondary cards in addition to their conference badges.

Only designated contact points of the admitted observer organisations and heads of delegations for these organisations will permitted to attend COP15.

IGOs and NGOs will be given a quota per organisation and these cards are transferrable.

“The quota per organisation will be recorded in the badge scanning system, so that the number of representatives entering the premises can be accurately counted.

Part of Bella Centre, close to where the main plenary sessions, where world leaders will speak is expected to be on lock down from Wednesday (16 December) when leaders make their country statements.


Most of the powerful nations of the world – United States, China, Japan, United Kingdom, France and Germany will be represented  by their heads of states.