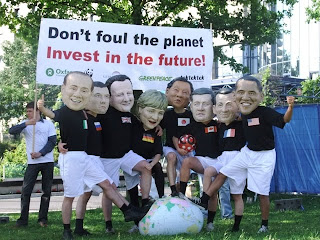 By Makereta Komai for Climate Pasifika in Bonn, Germany
11 June 2010 Bonn, Germany --- World Cup fever infected climate change talks in the city of Bonn, where some negotiators attended the last day of negotiations in their national colours.
South Africa’s lead negotiator, Alf Wills addressed the United Nations plenary session in full Bafana regalia.
Wills had lobbied Parties to end the proceedings by 3pm in time for the opening match between hosts South Africa and Mexico.
But much to his disappointment, the Ad Hoc Working Group on Long Term Co-operative Action (AWG-LCA) could not close early because of the differing views expressed in the revised negotiating text proposed as a concluding document.
Outside the Maritim Hotel, civil society protestors organised a football match between G8 leaders to remind them of their emissions reduction targets and their commitments to fast track financing.
“Only with national progress in the U.S, European Union and big emerging economies can Cancun deliver important decisions to get deep cuts in greenhouse gas emissions, prevent the many loopholes and make progress in providing investment needed for shifting to low carbon economy, said Paul Horsman on behalf of Tcktcktck campaign.
Within two weeks, some most powerful leaders will meet at the G8 and G20 summits – a clear message needs to be heard by these leaders how they want to move forward on the crucial investment packages Cancun can deliver to tackle climate change.”
Ms Makereta Komai will be covering the Bonn Climate Change negotiations from 31 May – 11 June 2010, thanks to support from Secretariat of the Pacific Regional Environment Programme (SPREP) and the World Wide Fund for Nature (WWF). She will provide daily coverage of the negotiations via PACNEWS and the SPREP website www.sprep.org, the climate pasifika blogspot, http://climatepasifika.blogspot.com and the PINA Green page http://green.pina.com.fj/