UNEP Report finds Copenhagen Accord pledges will not reach targets of 2 degrees or less.
29 November, Cancun - Pledges to cut emissions under the Copenhagen Accord do not add up. Formed after the 15th Conference of the Parties to the UN Climate Convention, in Copenhagen, Denmark last year, the Copenhagen Accord declared that deep cuts in global emissions are required to stop the increase in global temperature to below two degrees Celsius. It also called for an assessment that would consider strengthening the long-term goal including “temperature rises of 1.5 degrees.” 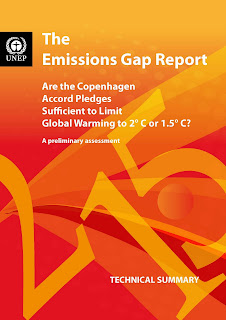 “The Emissions Gap Report”, a study by the United Nations Environment Programme (UNEP) finds the pledges made do not reduce emissions enough to limit global warming to below two degrees Celcius as declared.
http://www.unep.org/publications/ebooks/emissionsgapreport/pdfs/The_EMISSIONS_GAP_REPORT.pdf
“If you add up all of what the countries have put on the table in terms of the pledges you get to emissions in 2020 that are far above the level needed to get down to 1.5 to 2 degrees Celcius,” said Dr Bill Hare of the Potsdam Institute for Climate Impact Research, one of the Lead Authors of the report.

“I think one of the problems with the Copenhagen Accord process was that the goal was written down and the pledges came later and there hasn’t been a process that has said – ‘Great you have made some pledges but they don’t add up to enough.”

The Emissions Gap Report also shows that it is still technically and economically feasible now to achieve 40 billion tonnes or lower in 2020, according to Dr Hare - “so that it won’t break the bank and will actually have a lot of benefits for countries, so while reports show on the one hand that the pledges are not enough, we still have time to close this gap with enough political will”.

As of mid-November this year 140 countries have associated themselves with the Copenhagen Accord. Of these 85 countries have pledged to reduce their emissions or constrain their growth up to 2020. At the Cancun climate change talks, the Small Island Developing States (SIDS) are standing strong, calling for urgency to act now with deeper emission cuts than those pledged in the Copenhagen Accord, before it is too late.

“The window of opportunity to try and turn things around has been specified, we need to peak our emission rate, if we don’t we will miss the targets of creating a safer cleaner environment and that window will close,” said Ambassador Colin Beck, the Solomon Islands Ambassador to the United Nations. He believes this report states what the Pacific countries and Small Island Developing States (SIDS) have been saying for years.

The Emissions Gap Report emphasises that tackling climate change is still manageable, if leadership is shown. It is political will and leadership that is called upon to help make decisions that limit global warming and ultimately ensure the survival of the Small Islands Developing States (SIDS). These populations are amongst the most vulnerable to the impacts of climate change, yet have done very little to contribute to the global problem.
“Each country has to step up to the plate so to speak and make its commitment,” states Dr Hare, “and if countries politically are not prepared to do that then we certainly won’t get enough action that will reduce global emissions fast enough to prevent the dire threats that face SIDS and others so it really comes down to politics.”