By Stanley Simpson for Climate Pasifika Media Team
2 December Cancun, Mexico - Pacific youth delegates  took a frontline role on behalf of their peers from around the world – calling on leaders to guarantee young people a safe climate change future.
Fiji student and environmental advocate Krishneil Narayan spoke on behalf of world youths - at a plenary alongside UNFCCC Executive Secretary Christiana Figueres and declared that young people still have faith in the process – and will not give up on it.
He cited the work being done by Pacific youth who are already battling the harsh impacts of climate change.
“We youth in the Pacific are very concerned about our future in those islands, and instead of sitting around and debating the technicalities and the texts in square brackets - like our lovely politicians did last year in Copenhagen – we are actually getting to work,” Krishneil said.
“The youth in the Pacific have collaborated with each other and with their respective government departments, regional NGOs and diplomatic missions, to start community based climate change adaptation programmes.”
Narayan also took time to describe the ‘Pacific Climate Leadership Program’, the first such program in the Pacific region.
“Through our collaborations with Pacific stakeholders we are now able to provide leadership trainings not only to youths but also women and men from all ages who go on to manage community based adaptation programs, we have started with six different Pacific Island countries.”
The commitment of young people was visible today as many wore blue t-shirts quoting Solomon Island youth Christina Ora: “You’ve been negotiating all my life, you cannot tell me you need more time.”
Ora made the comment at the climate change conference last year in Copenhagen.
(http://climatepasifika.blogspot.com/2009/12/you-have-been-negotiating-all-my-life.html) 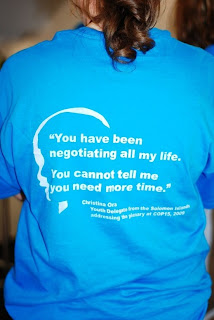