Niue, the Rock of Polynesia to learn from climate change adaptation conference

By Mona Ainu’u – Broadcasting Corporation of Niue
Closing Bulletin, June 20011, Apia Samoa -  Niue Island sits in the Pacific Ocean on the biggest upraised Coral in the world, but it’s the smallest nation in comparison to those countries that attended the “Lessons Learn for Future Action” climate change adaptation conference in Samoa this month.
Rossylin Pulehetoa from the Climate Change office in Niue is not overwhelmed by this comparison she has been making the most of the meeting considering all information as constructive and imperative to the development of Niue’s climate change adaptation work.
“The conference is very informative and educational,” said Pulehetoa. 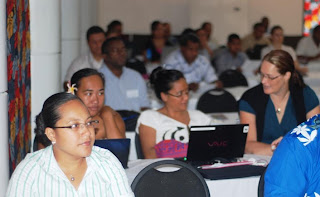 “I have liked hearing the experiences from the Caribbean countries, the NGO perspective as well and also other pacific island countries and I find it very useful and wouldn’t mind using some of those activities or projects that is happening in their countries to be adapted for Niue.”
Niue is experiencing similar problems when it comes to adapting to climate change as other countries across the region.  Pulehetoa is also finding these challenges are being responded to in similar ways as other Pacific islands countries and territories.
“Maybe the adaptation challenges are different in some regards, but overall the issues are the same and the understanding as well especially in trying to target the community, those are the very core people that we need to get the message out on climate change right down to the grassroots level”.
Niue has carried out numerous climate change awareness activities, such as community workshops, music videos, talent quest for women and song quest for men, as well as competitions for posters, poems and billboards.  With all the awareness and information available in Niue, there is now a need for more action and on-the-ground work on climate change adaptation.
“I think there are too many procedural processes and there are new terms and methods and ways on how to tackle climate change, but when you get down to it, its new terms and methods for tackling basically the same thing.  We need to see more action.”