BROADENING THE CIMATE CHANGE DEBATE: “Not just about sea-level rise”

Durban, South Africa,5 December 2011 - Climate change goes beyond the direct impacts of well-publicised sea-level rise, says an expert from the Pacific region.
Think food security and health. Think infrastructure; planning and budgeting. Think holistic.
“These are all interconnected issues that impact our Pacific countries’ abilities to deal effectively with the impacts of climate change,” says Brian Dawson, Senior Climate Change Advisor with the Secretariat of the Pacific Community (SPC).
“People need to know their options for survival and quality of life, and how to effectively adapt to these grave threats.”
Adaptation to the adverse effects of climate change is one of the key international issues being negotiated at the United Nations Climate Change Conference – COP17 – currently underway in Durban, South Africa.
Filling the knowledge gap
Citing the findings of a recently released report from SPC titled “Food Security in the Pacific and East Timor and its vulnerability to climate change”, Mr Dawson said one of the key issues to address in the Pacific is understanding adaptation options.
He poses: “When will we have to adapt? What are the options that we have? How much is it going to cost? Who should pay for it and what should we do as countries ourselves to actually increase our resilience to climate change?”
There’s more than just climate change at work asserts Mr Dawson.
“There’s a range of variables that due to differences in governance, urbanization, population growth, waste streams, degradation of reefs – these actually increase island nations’ vulnerability to climate change.”
Mr Dawson suggests, as outlined in the SPC report, the need to improve existing management of resources and governance systems, and that in itself, irrespective of climate change, will be a benefit, and will also increase resilience to climate change.
“Climate change is a very slow, erosive effect in things like agriculture, sustainability of forest systems, ecosystems based on water changes of river levels and extreme rainfall events,” said Mr Dawson.
“All those things have an impact of day to day activities, like growing crops, catching fish, so it’s very important that we build that broad base of understanding in line ministries and communities if we’re actually going to get together a sensible approach to adaptation.”
The Ulu o Tokelau (Head of Government), Foua Toloa, echoes Mr Dawson’s sentiments on the far-reaching effects of climate change, reflecting on the small island nation’s recent water crisis.
“When you have no water there is a broad spectrum of impacts,” said the Ulu.
“We were under threat from health issues, even more vulnerable to disasters and there were many other development concerns because we had a severe shortage of water.
“When climate change affects one area, other areas feel the repercussions."
Tokelau declared a state of emergency in October this year after six months without substantial rain, their primary source of fresh water. 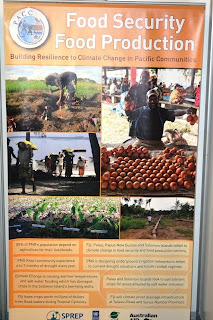 Food security - quality not quantity
Another major concern affecting Pacific peoples’ day-to-day lives, with climate change impacts a key factor in the severity of the issue, is food security.
Food security includes various elements, according to Mr Dawson.
“They include having access to food, and that’s a function of both incomes and also the ability to supply food to markets; it’s making sure that the food you have is hygienic; it’s about adequate nutrition; and in some of the countries there’s been a decline in the percentage of their diets supplied by traditional crops and fish being replaced by imported foods.”
All those different aspects are interrelated said Mr Dawson, and accentuated due to the impacts of climate change.
“When you talk about food security, you need to think about more than enough food, you need quality of food,” he said.
“Generally in the Pacific people are quite well fed, but in the nutritional aspects, you can have over nutrition and under nutrition and what we need to have is proper nutrition.”
Food production per capita has been declining in just about all countries in the region according to Mr Dawson.
“With climate change you get increased variability and intensity of rainfall, and consequent losses from things like floods and change in pest and disease regimes,” said Mr Dawson.
“A lot of crops depend on pollinators and with climate change these pollinators are disappearing, different fruits are flowering at different times, so the traditional food cropping systems are going to change.”
Fish
One of the significant findings of another SPC report, “Vulnerability of Tropical Pacific Fisheries and Aquaculture to Climate Change”, is that coastal fisheries will decline over the course of the century.
“So that by mid-century it will decline by 20-30%, and by the end of the century by up to 50%,” said Mr Dawson.
“At the same time, the availability of tuna increases, for a range of reasons, so some countries like Kiribati and Marshall Islands, Samoa, may get 20-40% increase in available tuna.
“So you could see that as a windfall in terms of exports of tuna, but at the same time, an important adaptation response is for greater domestic consumption of tuna to substitute for the loss of coastal fisheries.”
So when Pacific nations start planning ahead to get appropriate nutritional supplies, you need to think about what options are available.
“Luckily for the Pacific we have the increase in oceanic fisheries catches that can supplement food supplies and reduce our reliance on imported food,” said Mr Dawson. “But we need to understand now, so we can plan for the decades ahead.”
COP17 and the Pacific
According to Mr Dawson, the UN Climate Change Conference currently underway in Durban needs to deliver on finance and mitigation issues for the Pacific to reap any substantial benefits.
“The Pacific Island group at Durban, through the Alliance of Small Island States (AOSIS), needs to articulate the particular concerns of the Pacific and I think we do that increasingly well,” said Mr Dawson.
“One key issue for the Pacific will be finance – where and how will we get the funds to adapt to climate change?”
COP17 has attracted some 20,000 delegates and international climate change negotiators from across the globe. The conference opened on 28 November and will close 9 December. See www.unfccc.int for more information.﻿