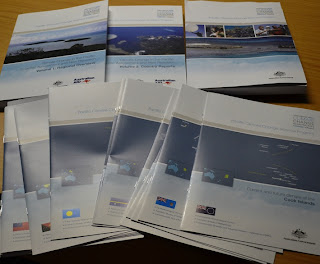 Durban, South Africa, 6 December - The UN Climate Change Conference in South Africa was the backdrop for the launch of two new landmark resources that have a crucial role for the Pacific region.
The report Climate Change in the Pacific: Scientific Assessment and New Research as well as the web-based projections tool, Pacific Climate Futures were the focus of a side event featuring the Hon. Greg Combet AM MP, the Australian Minister for Climate Change and Energy Efficiency as well as the Vice Minister for Forestry and Climate Change from Papua New Guinea, Hon. Ronald Asik.
﻿It was a full house for the special event that was a partnership between the Secretariat of the Pacific Regional Environment Programme (SPREP) and the Pacific Climate Change Science Program.
﻿
“As a minister, I am aware how important it is that scientific research is relevant to policy and provides useful information to assist decision-making,” presented Hon. Greg Combat during his opening statement.
“I am confident that this new research and accompanying information tools will be invaluable resources for climate scientists, communities and decision-makers in the Pacific to inform vulnerability analysis and priority setting and build resilience to future climate change.”
The newly launched reports can be found at http://www.pacificclimatefutures.net/
“The importance of having a high credibility of science in our reports is clear, this is prominent in these newly launched materials.” said the Director-General of SPREP, Mr. David Sheppard.
“The role of partnerships and cooperation is significant to help us provide such important materials to help guide our climate change work in the region. We are appreciative of our partnerships that helped bring together and produce such extensive scientific reports.”
Australia has committed $328 million over five years to the Australian International Climate Change Adaptation Initiative with a key focus on least developed countries and Small Island Developing States.
Also featured during the side event were Scott Power, the Senior Principal Research Scientist and Research Manager of the Australian Bureau of Meteorology as well as several Pacific island experts who have used the reports to help guide their work; Mr. Salesa Kaniaha the Manager of Climate Services of the Vanuatu Meteorology and Geo-hazard Department and Ms Rossylynn Pulehetoa-Mitiepo, Coordinator of the Niue Climate Change Project, Department of Meteorology and Climate Change.
We’ll be bringing you more news on their presentations over the coming week.
There are two volumes to the Climate Change in the Pacific: Scientific Assessment and New Research. Volume 1 is a Regional Overview which provides an analysis of large-scale climate phenomena such as the El Nino-Southern Oscillation, seasonal variability and past climate trends and further develops regional climate change projections.