“We must be united for our common good and united for unity, pleaded Ban Ki Moon in his statement to 130 world leaders gathered at the Rio+20 conference in the Brazilian city.

SG Moon said the world would have expected bolder and ambitious commitments from leaders.

“Negotiations have been very difficult and slow, because of conflicting interests and ideas. Some have tried to be bolder while some Parties have strongly expressed their own views and interests. It has been such a long and delicate process of negotiations, Ban Ki Moon told journalists.

As the convener for the Rio+20 conference he was encouraged by the strong leadership shown by Brazil in achieving the outcome now before world leaders.

This political statement by world leaders, no matter how good, will mean nothing if these actions are not implemented.

If these commitments are not translated into action, it means nothing. All these outcomes should be implemented without further delay, said the UN top diplomat.

“20 years ago in a breakthrough here in Rio, world leaders put sustainable development on the world map but those bold words and good intentions were not enough.

“We cannot continue to burn and consume our way to prosperity at the expense of the world’s poor and the global environment. Let us not forget that Rio +20 is about people who hope for real improvements in their daily lives for the poor, women and young people and future generations.

One of the achievements of Rio+20 will be the establishment of the universal sustainable development goals (SDGs).

Commenting on the draft outcomes text, the Secretary General of the Rio+20 conference, Sha Zukang said the document will be put to Heads of State on Friday for adoption.

“Like all negotiations, there will be some countries that feel the text could be more ambitious. Or, others who feel their own proposals could be better reflected, while still others might prefer to have their own language,” he said.

“But, let’s be clear: multilateral negotiations require give and take.”

“The spirit of compromise is the mark of a good consensus, and crucial if all countries are to be on board, take ownership, and share a collective commitment,” Mr Sha said. “This is the only way forward if we want to harness the necessary action for advancing together on a path of sustainable development.”
Rio+20’s high-level meeting runs from 20-22 June, and is expected to bring together over 100 heads of state and government, along with thousands of parliamentarians, mayors, UN officials, chief executive officers and civil society leaders to shape new policies to promote prosperity, reduce poverty and advance social equity and environmental protection. 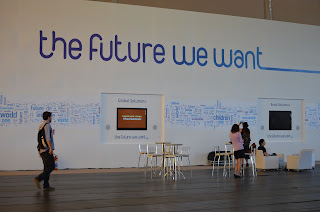