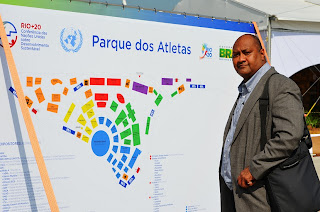 13 June 2012, Rio de Janeiro - Officials from 190 countries are in Rio de Janeiro this week for the PrepCom meeting ahead of next week’s High Level meeting of world leaders to adopt clear and focused practical global measures for implementing sustainable development. Negotiators from the Pacific are also here to finalise the text of what will become the outcomes from Rio that will form the new global commitment to achieving sustainable development. Sefanaia Nawardra, the Director of Environmental Monitoring and Governance at the Secretariat of the Pacifc Regional Environment Programme (SPREP) explains to Makereta Komai some of the major issues being pursued by the Pacific negotiators here at Rio+20 meeting


Nawadra: There are four key issues that Pacific Island countries and their partners are going to be pushing for in Rio. The first involves ocean and good oceans management and the equitable sharing of benefits that accrue from the development and use of ocean resources. This is being coined the ‘blue economy’ by the Pacific Islands missions in New York in the green economy debate. The second is to try and keep the special case of Small Island Developing States (SIDS). Over the years there have been challenges to the special case for SIDS. A number of other negotiating groups are arguing that they also have special case. It’s a real challenge for SIDS to continue to keep the ‘special case’ that was agreed to at the initial Rio Earth Summit.

MK: How different is our ‘special case’ to the other regions that are also staking their claims?


Nawadra: I think that’s one of the major arguments – you can’t really argue vulnerability to climate change any more because it’s not special to the Pacific. There are other areas like low lying coastal states, mountains states that are also vulnerable to the impacts of climate change. What we are pushing now is in the area of capacity, an area that differentiates our region from the rest of the world – we are small in size, have small administrations and small population, the capacity to address issues is a lot smaller and difficult compared to countries in these regions also claiming vulnerabilities.

MK: Is it almost like an ‘uphill battle’ trying to justify our special case?


Nawadra: For us, it’s not so much arguing our case, but making sure that our case is given the emphasis it deserves because of the competing interests from other regions. It’s really trying to argue our position to make us stand out from the rest.

MK: What are the other issues for the Pacific?


Nawadra: Another major issue is to convince developed countries to honour their commitments before they enter into new commitments that may come out of Rio. The other is the issue of energy which is a major concern for us in the Pacific, especially for maritime transportation, the high cost of getting energy in and trying to promote renewable energy. Health is another issue, especially the linkages between non communicable diseases (NCDs) with sustainable development. It is something that needs to be argued – not in health per say but as an issue of economic development and risks it poses to the work force.

MK: What are we specifically asking for on the issue of NCDs from this two weeks of negotiations and the high level session, where a number of Pacific Leaders are expected to attend?


Nawadra: We are trying to signal the impact of the high level of NCD rates in the region, not only on health but also its roll on effect on the economies of the region, if it’s not addressed properly.

MK: Your would have had seen the draft text to be negotiated in the coming days here in Rio – these four key issues for the Pacific you’ve identified – are you seeing any reflection of these issues in the draft text?


Nawadra: Most of them are reflected in some way. But in the negotiation process, we need to put in a lot of effort to keep the language that is already there and try and add on and strengthen areas where it may not be as strong as we like it to be. I think oceans issue has received quiet a lot of support because there are a lot of countries and partners also interested in it. One area that we might want to look at a bit more is in the areas outside national jurisdictions or the high seas, especially in light of the number of initiatives we have undertaken in the region related to the good management of our Exclusive Economic Zone (EEZ).We also need to look at how we can strengthen areas outside the EEZ and that can only be done through an international global process because the areas don’t belong to any countries of the region. We are hoping that Rio can be the beginning of that process.

MK: In terms of the support in getting the kind of language that the Pacific would like to see, what kind of support are we looking at a major global conference like this?
Nawadra: Our missions in New York have been doing a very good job. As I said earlier, they coined the term ‘blue economy’ in order to put a label to the concerns about the inclusiveness of green economy to also include ocean and coastal issues. The issue has become part of the consolidated position issue for negotiating groups like the Alliance of Small Island States (AOSIS) and G77. It’s good that the Nauru is current chair of AOSIS and that helps put our issues up on the agenda of AOSIS. Also, some of our major partners like Australia and New Zealand, the European Union, UK are supporting our position.

MK: You earlier alluded to the need for commitments here in Rio. How much more can the Pacific push for ‘real’ global commitments?


Nawadra: The more urgent concern is for countries to make the commitments they’ve already made, meet those first before we go into talking about new commitments that may be required.

MK: What if anything is to be expected from Rio that we can take back to the Pacific at the end of two weeks of conference?


Nawadra: One is the recognition of oceans issues. We live in the Pacific and are responsible for large areas of ocean and we’ve tried to organise ourselves through national and regional initiatives like the Pacific Oceanscape, the Nauru Agreement on fisheries and moves to large marine protected areas in Kiribati and Cook Islands, the locally managed marine area networks that are there throughout the Pacific. What we are saying is that we are doing things from our side and we need global support for managing these resources because we are not doing this for ourselves but for the future survival of the global community. If we get that sort of support here in Rio, then I think that will be a major step forward. The second one is the continuing recognition of special case for SIDS. I think that has already started to happen because there is already talk of having a follow up to Barbados in 2014 and that signals some acceptance of special case for SIDS.