To be successful, Rio+20 goals need to be localised and actioned - Samoan PM 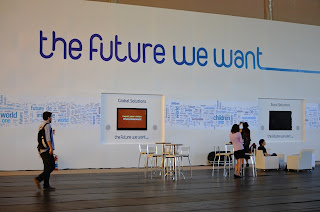 04 JULY 2012 SUVA ---- In the words of the Samoan Prime Minister, Tuilaepa Sailele Malielegaoi - 'the real measure of what was achieved at the Rio+20 is not in the outcomes document but how these goals are localised  when we return home.'

While addressing world leaders in Rio de Janeiro on 22 July, the no-nonsense Pacific Leader said while the outcome is not perfect, 'the shortcomings gives Samoa a level of comfort that made his government lend its support.'

"There is never a perfect document, and Rio is not the first time to achieve one. Trying to satisfy everyone's interests is an exercise in futility.

"Some are satisfied while others feel betrayed. Critics see it as lacking in ambition and selective in its coverage while supporters hail it as an important breakthrough in tune with today's challenges and realities. Some lament it as missed yet another missed opportunity, said PM Tuilaepa.

He said no matter how ambitious Rio+20 is, "if we elected leaders are not committed to lead and drive sustainable development, we lose the trust and confidence of partners and our credibility will suffer."

Samoa, like Fiji, has put to the table the island nation's interest to host the third international conference for Small Island Developing States (SIDS) in 2014.

Convening the third SIDS international conference is one of the many outcomes of the Rio+20 conference. Parties recognised the need to call a meeting two years after Rio to consider a coordinated, balanced and integrated approach to address the sustainable development challenges of SIDS.

It is now up to the United Nations 67th General Session to determine the modalities of the 2014 conference.

"Co-incidentally, 2014 is a significant year for my own government as we will become the first Pacific nation to graduate from being a Least Developed Country (LDC).

"While hosting a global meeting is a privilege and an honour, there will be more other equally able countries also bidding. Samoa has nevertheless made known to Alliance of Small Island States (AOSIS) and the Pacific sub region its interest to host this event if given the opportunity, revealed the Samoan leader.

He said it's just hosting a big international conference but an opportunity for Samoa to share its story with the rest of the world.

"It is about primacy and the importance of partnerships that demonstrates Samoa's progress. Moreover, we want to demonstrate that being a SIDS and an LDC should not discourage poor and vulnerable nations from advancing to achieve economic, social and political progress, Tuilaepa said. 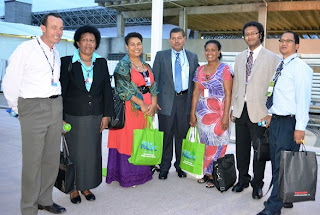 Fiji, on the other hand is equally confident of its bid to host the same international gathering, which is expected to bring together over 10,000 delegates.

Prime Minister Commodore Bainimarama, also speaking in Rio expressed Fiji's strong interest. 2014 will election year for the military-led Fijian administration.  Both governments will now work on their bids in anticipation of the modalities to be set out by the UN General Assembly which meets from September to November every year.

Regional action
Now that the 'Future We Want' has become a living document for the globe, what happens next for the Pacific?

The Head of the UN ESCAP Pacific Office, Iosefa Maiava said the real work begins in the different regions of the world. The ESCAP Pacific Operations Office was instrumental in convening Pacific PrepCom meetings en route to the Rio+20 conference.

"The document is also very clear that green economy for sustainable development and poverty eradication is to be implemented in accordance with certain countries circumstances, which means that it's now up to each country to decide on how it implements the outcomes from Rio, said Maiava.

In addition, regional organisations in the Pacific have been given strong mandate to co-ordinate the implementation of sustainable development at the regional level.

One of the major outcomes of Rio+20 is the agreement to launch a process that will lead to the establishment of SDGs to merge with the Millennium Development Goals (MDGs).

The proposed SDGs, according to Maiava are going to be different from the MDGs because the Rio+20 outcomes refer to some new thematic areas like renewable energy, oceans and climate change.

"For Small Islands Developing States these kinds of issues are not clearly articulated in the MDGS because there are no targets. The other difference is the recognition of the need to balance the three pillars of sustainable development.  It's not very clear from the MDGs that there is clear balance between the use of economic instruments to bring about greater protection of the environment and social equity, which is what green economy is really about, said Maiava.

New initiatives
A wide range of actions have also been pledged during Rio+20. These include planting 100 million trees, empowering 5,000 women entrepreneurs in green economy businesses in Africa, and recycling 800,000 tons of polyvinyl chloride (commonly known as PVC) - one of the most widely used plastics - per year.

A key element of Rio+20 was its outcome document, entitled "The Future We Want" and agreed on by Member States.

"I'm very grateful and encouraged by world leaders for their strong political commitments to agree to a solid outcome document which puts all of us towards a greater sustainable path," said United Nations Secretary-General Ban Ki Moon.

The outcome document calls for a wide range of actions, such as beginning the process to establish sustainable development goals; detailing how the green economy can be used as a tool to achieve sustainable development; strengthening the UN Environment Programme (UNEP), promoting corporate sustainability reporting measures, taking steps to go beyond gross domestic product to assess the well-being of a country, developing a strategy for sustainable development financing, and, adopting a framework for tackling sustainable consumption and production.

Rio funding commitments
At the end of the  United Nations Conference on Sustainable Development (Rio+20), some US$513 billion in funding has been committed by governments, the private sector, civil society and other groups to achieve a sustainable future.

"From the very beginning we have said that Rio+20 is about implementation and concrete action," said Rio+20's Secretary-General, Sha Zukang.

"The commitments that we share with you today demonstrate that governments, the UN systems, and the nine major groups are committed and serious about implementation."

Under the provision of finance in the 'Future We Want' document, Parties recognise the need to mobilize resources from various sources to give strong support to developing countries in their efforts to promote sustainable development.

The Rio+20 conference agreed to set up an intergovernmental committee comprising of 30 experts nominated by regional groups to prepare financing options on an effective sustainable development financing strategy. It will be established under the auspices of the United Nations General Assembly with technical support from UN agencies.

The PACNEWS Editor was part of the SPREP Media team that covered the just concluded Rio+20 conference in Rio de Janeiro, Brazil.  The project was supported by a partnership between the Secretariat of the Pacific Regional Environment Programme and the Pacific Assistance Media Scheme and Conservation International Pacific Island Program.