5 December 2012, Doha, Qatar - This is the third in a series of human interest stories by SPREP’s Nanette Woonton on Pacific women showing leadership in the climate change field.

Sitting here at the Pacific booth at the UN Climate Negotiations in Doha, every so often someone will ask me where the Pacific is.  When I list the countries people nod when they hear Tahiti and Fiji, but when I mention Tuvalu there is a knowing smile, “aaaah…sinking islands,” is what they usually say.

Tuvalu, according to the World Bank in 2011, has a population of close to 10,000 people.  I’ve met a Tuvaluan who has left her shores for these two weeks to make a splash at the international arena and she seems to be doing a good job.  Ms. Pepetua Latasi of Tuvalu is the only female in the Expert Group for the Least Developed Countries aka the LEG, at the UN Climate Negotiations on top of that she is the Head of this group and has been reinstated to complete a second two year term.

“It’s very challenging.  When I first started I was really lost.  This is a really complicated process and the language they use is like a whole new dialect.  They shorten everything, and there are so many acronyms,” said Pepetua.

“I have found out that the only way you can get your message across is by making your voice heard by others and that is one of the greatest things I find about being the Chair of the LEG, I can let people know where Tuvalu is and what we are experiencing because most people don’t know.”

The LEG consists of 12 members two of them are from the Small Island Developing States, Tuvalu and Solomon Islands.  It was established to advise and provide technical support to the Least Developed Country parties on issues related to adaptation and meets twice a year. 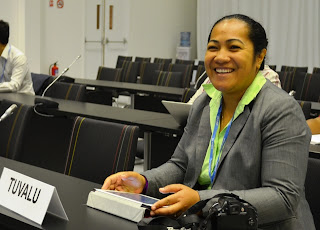 Under the guidance of Ms. Pepetua Latasi, the Least Developed Countries Expert Group completed their technical guidelines for the National Adaptation Plan of Action, which must be implemented by the LDC’s under the United Nations Framework Convention to Climate Change.

The LEG is now working on the National Action Plan technical guidelines which will be presented at the UN climate negotiations in Doha, Qatar.

“It is an experts group so there is no negotiations work done in this group at all, it is all technical work in the LEG.  It takes a lot of time and commitment to be a part of this, on top of what I am already doing at the national level in Tuvalu.  It is a lot of work.”

It’s amazing that a Pacific woman from the island nation of Tuvalu is leading a group of 12 special experts at this international arena.  Especially Pepetua, she caught up on the process after taking a break to complete her Undergraduate degree in climate change policy and environment management 2008 and then returned to join the UN climate negotiations in 2011.

Pepetua also presented at the opening meeting of the 18th Conference of the Parties to the United Nations Framework Convention on Climate Change, reading a statement on behalf of the Least Developed Experts Group, addressing a meeting hall of several thousand people.

“It’s a very good experience being the Chair of the LEG.  I am building my capacity, but have also established networks and met people that are able to assist us and Tuvalu.”

A lot of commitment, hard work and support, has helped Pepetua succeed at what she does including support at home.  Pepetua is the mother of a young son and having spent a number of years in this process, with her heavy work schedule the dynamics have changed at home.

“I have a little boy at home and after doing this process for a while I miss out on a lot.  Things like his birthday, preschool graduations and all those types of things.  I have even noticed at home that my son turns to his father for things that he used to ask me to do, the little things like if my son wants a drink or wants to go to sleep, he asks for his Father instead of me, he has a growing attachment to his Dad more than me.”

Secure in the support she has, Pepetua has stepped up to the plate.  She is representing her island nation with pride, being fearless in making the voice of Tuvalu heard and taking on the responsibility of leading a UN climate change experts group.  You hear the expression – “one can sink or swim.”  Having dived into the UN climate negotiations, Peptua is definitely swimming strong.

“I encourage other Pacific women to take whatever positions they have taken on, especially in taking leadership positions.  There is nothing wrong a women excelling in a typically male environment.  I’d tell them to go for it!”