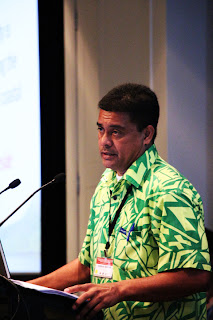 9 July 2013, Nadi, Fiji - The tiny island of Kosrae is gaining a reputation as a shining example of climate change adaptation measures.
Last year Simpson Abraham who is running the Pacific Adaptation to Climate Change (PACC) pilot project in Kosrae spoke at the United Nations Framework Convention on Climate Change Conference of Parties in Qatar. Only five countries were invited to present on their adaptation projects. The Association of Pacific Island Legislators recently asked him to come to Hawaii in order to do presentation on the project but because he was already scheduled to give a presentation at the Joint Meeting of the 2013 Pacific Platform for Disaster Risk Management and Pacific Climate Change Roundtable he had to decline.

He presented on Kosrae's project at the joint meeting this morning.
The project he has been talking about is the Tafensak road project. In a presentation given by SPREP's Director General, David Sheppard also praised the project and called it an excellent example of "climate change proofing of infrastructure".
Abraham said that in 2008 a king tide rolled over the Tafensak area, burying the six mile long Tafensak roadway under several feet of water and also flooding nearby homes. It was quite the wakeup call for the island of the Sleeping Lady.
In 2009 the Asian Development bank funded an assessment of roads which also made recommendations on what could be done to "climate proof" the roadways.

Kosrae approached SPREP and asked if they could be one of the PACC pilot projects. The project started three years ago and has one year left. Construction of culverts and drainage systems has begun and is being carried out by four local contractors, all of it funded by the Global Environment Fund. Abraham's salary at KIRMA (Kosrae Island Resource Management Authority) is also paid by the GEF. KIRMA is the lead agency on the PACC.
The Kosrae PACC is one of 14 PACCs in the Pacific Region funded by GEF.

In 2009 the FSM developed a National Climate Change Policy. In 2011 Kosrae passed Climate Change legislation and next week a small amendment is scheduled for a reading at the Kosrae Legislature. If it passes it would add climate risk reduction and climate change adaptation measures as a requirement before any development project could be approved. Abraham said that Kosrae is also updating its Environment Impact Assessment Guidelines. He also said that Kosrae is trying to develop a building code.
By the time the PACC ends next year the government will need to have made a decision as to whether they would be willing to take ownership of the PACC for further climate risk projects.

In a related but separate program, GIZ (German financial assistance) funded a study of coastal erosion that also made recommendations to protect against further coastal erosion in Kosrae. 80 percent of Kosrae coastline has eroded and some home are now right next to the ocean. Kosrae developed a shoreline management plan, and Abraham says that he is currently in the process of negotiating to fund the implementation of that plan.
The PACC Project is designed to promote climate change adaptation as a key pre-requisite to sustainable development in Pacific Island countries. Its objective therefore is to enhance the capacity of the participating countries to adapt to climate change and climate variability, in key development sectors.   The Pacific Adaptation to Climate Change (PACC) project is funded by the Global Environment Facility (GEF) and the Australian Government (AusAID), with the United Nations Development Programme (UNDP) as its implementing agency and the Secretariat of the Pacific Regional Environment Programme (SPREP) as implementing partner. The project is from 2009 to 2013.   The PACC project covers 14 participating countries and helps develop three key areas that build resilience to climate change in Pacific communities: Fiji, Palau, Papua New Guinea and the Solomon Islands focus on Food Production and Food Security; Cook Islands, Federated States of Micronesia, Samoa, Tokelau and Vanuatu are developing Coastal Management capacity; and Nauru, Niue, Republic of Marshall Islands, Tonga and Tuvalu are looking to strengthen their water resource management.