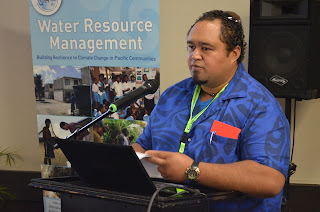 2 July 2013, Nadi, Fiji -   A climate adaptation project to improve the strength and durability of Cook Islands port infrastructure on the island of Mangaia has been replicated in two other islands, says Paul Maoate.

Maoate is the Pacific Adaptation to Climate Change (PACC) co-ordinator in Cook Islands and is overseeing implementation of the project on the island of Mangaia. PACC is funded by the Global Environment Facility (GEF) and implemented by the Secretariat of the Pacific Regional Environment Programme (SPREP).

Maoate said two harbours in Mitiaro and Mauke are ‘following similar designs to Mangaia and there are moves now to also use the same design in the northern group.’

Mangaia, the second largest island in Cook Islands consists of raised coral limestone and is a narrow lagoon with a reef in close proximity to shoreline. It’s a coastal community made up of a population of approximately 300 people that is reliant on its wharf, import of resources, fuel, building material and goods and services for its community stores.

Its wharf, according to Maoate is not safe for vessels to load and unload supplies because of rough and unstable sea conditions.

“We are looking at climate proofing or strengthening the harbour to reduce remedial costs following natural disasters.

“The harbour is the island’s main connecting point to Rarotonga’s shipping services. It is the centre-point for all cargo deliveries and the main launching and return point of the island community fishing vessels. Inter-island shipping vessel offload cargo onto the island barge that utilizes the harbour for docking purposes.

Future predictions based on the coastal calculator suggests that the whole Mangaia coastal front is prone to sea surges and in the next 20-50 years it can move further inland some 200 metres beyond where the current road is built.

“One of the possible options is for residents to relocate. It’s their decision and we will leave it to them. We also provide other options, which include strengthening their homes or building sea walls.
Another infrastructure under close scrutiny is the island’s airport runaway which is 15 metres above sea level.

“We are considering the option of relocating it because strengthening it is too costly. We can only do this with the support and participation of the local community, said Maoate.

An integrated coastal management policy will be prepared that will identify improved building design, future coastal protection, and relocation of residential homes, provide emergency road and improve the capacity of technical designers and village local planners.

“The PACC project has paved the way for government. It helps government identify the problem and puts aside funding to deal with the maintenance or overhaul of public infrastructures.

Mangaia has three main villages, namely Oneroa, Ivirua and Tamarua, all located along the coastal plains.