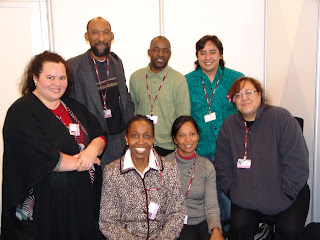 In September 2009 in New York, leaders of the World’s 42 island states, called the AOSIS grouping, delivered a resounding declaration to the United Nations General Assembly. The AOSIS group demanded that global warming be kept well below 1.5 degrees Celsius (°C).  Dubbed “1.5ºC to Stay Alive” a campaign based on their declaration to the UN gives voice to those living with the most devastating impacts of climate change. Amongst those raising the alarm on the catastrophic impact of going above 1.5 degrees is Dr Albert Binger. Formerly an academic with expertise in environmental economics, Binger is now a '1.5 to stay alive' lobbyist based within the technical team supporting the work of AOSIS chair, Ambassador Dessima Williams of Grenada. He shared his thoughts with pacific journalist Lisa Williams-Lahari.

Excerpt from Q and A with scientist turned activist Dr Albert Binger (pictured above back, 2nd from right):
Q.What is the simplest way to put across the concept of “1.5 to stay alive?
The simplest way is at 2 degrees, we say it’s like flipping a coin (flips a coin): heads or tails?
Q. Heads
You just lost the planet, it’s tails.
Q. Just like that?
Just like that. 2 degrees is a 50-50 chance that you make it or a 50-50 chance that you don’t make it. It’s like putting your kid on the school bus knowing he may come home today, or he may not. Would you do that?
Q. I wouldn’t have a choice.
Yes. That’s the bad part. Island people never had choices but unfortunately it falls to us to try and protect the future of the planet. Very ironic but paradoxical.
Q. So the little people here have to make the biggest noise?
That’s what it comes down to. Because we will be the first to go.
Q. Is the rest of the world listening?
I would say more countries, not necessarily big countries but more countries, and not just islands, are beginning to understand that the risk is just too great. And that there’s nothing wrong with saying “let’s take 1.5 less and be safe than take 2 degrees and be sorry”.

Q: Here at COP15 you've brought in one of the most ambitious targets in the form of the 1.5 campaign. What are the challenges of bringing that to the table for people who don't know our realities?
The developed countries have done a very good job of selling 2 degrees whatever that means. So for us to try and convince them that 1.5 is a better option is already an uphill task. As the science becomes more understandable and there is more data available it’s showing that 2 degrees is not a sustainable option. It has a number of scientific shortcomings.

Q.How do you make all the science and the figures, the data and the jargon and the acronyms involved with explaining those shortcomings jump into life for the people you are selling these commitments to?
Our constituents are the small island states. The experience of small island states is very simple. At two degrees we know our marine ecosystems don’t function. Our reefs become non functional. The photosynthetic activity or how they create food basically ceases at 2 degrees. It becomes too warm for marine life so they migrate. So for us, finding examples of what happens at 2 degrees is the most effective way to communicate why we don’t consider it acceptable. Also 2 degrees means there’s a lot more energy in the ocean so the cyclones, typhoons and hurricanes whatever part of the world you live in, become much bigger because there is just that much more energy to drive them. So we basically associate it with the impacts and it gets the message told a lot better than the 350 parts per million or the 450 parts per million theme.

Q.When you are taking that island reality to the big guys who only understand islands when they are picturing holidays there, how do you sell that?
Survival. Because in truth and in fact, the bottom line is 450 or 350. It’s a question of how much they pay for their energy services so it’s like economic impact. We say ‘it might cost you a little more for your electricity. It might cost you more to drive your car and it might let your rate of GDP reduce’. But those are things they can adapt to. In our case, it’s survival and there is no adaptation. We either survive or we don’t so we basically play the card that considers the shoe being on the other foot and ask Would you like us to treat you the way you treat us? Would you want to survive?’

Q.What do they say to you in that moment?
Usually you don’t get a straight answer. I don’t think they really do frame the question in that way.  They have grown accustomed to seeing it as an issue of national policy for themselves or the developed countries, not from the context of survival for those who are most vulnerable.

Q. So this is really the last chance station?
Pretty much. Because if we look at the reports from the IPCC (Inter-governmental Panel on Climate Change)  the next report is not due out for another three or four years, so usually if we wait to make decisions on that report we probably are going to miss some of the windows. We already are seeing growing emissions from methane which is a very worrying issue because there are significant amounts of methane trapped under the ice and in the frozen tundras. If we continue to see release of methane, we continue to see melting of icecaps then basically we are losing two ways. The icecap reflects solar radiation out so it will mean (with less icecaps ) that more of the solar radiation stays in. There’s more warming and more of the methane, and more reflection of radiation, so even more warming...it’s not good.

Q.The pacific world we come from is seeing COP from the other side of the world. What can people do from where ever they are to drive “1.5 to stay alive” home?
Get to their politicians. Get to their decision makers. Tell them we want to survive. Do not accept anything above 1.5 because it will be catastrophic for all of us.

Q.What’s the nutshell anecdote you share when explaining this to everyone?
Just that 2 degrees is just too much for too many people. Few people in the world will have a chance of surviving a 2 degree average temperature increase because the problem is, it’s an average. It’s not like every place is going to be 2 degrees warmer. It’s not like yesterday the temperature was 20 degrees celsius so for the future it will be 22 degrees. That’s not how it works. The climate systems are driven by the ocean, and when its warmer in the ocean there are lots of differences in terms of the climate, in terms of the rainfall, the droughts, and the intensity of rainfall. The agriculture may no longer be viable in certain places. 2 degrees is a lot of sea level rise so fresh water resources will no longer exist. Our ports, airports, roads and settlements will no longer be able to survive 2 degrees. Some countries will flat out disappear. You have a problem in the Pacific. Kiribati, Tuvalu, islands in Papua New Guinea and Fiji, across Asia and the Maldives. There is coastal erosion, a whole host of problems we are just beginning to see. You in the Pacific are already living with king-tides which take away big chunks of real estate. These things were not there before. They are brand new, they never existed, otherwise these atolls would not have existed either. So change is already taking place and 2 degrees of change  will just be too much. If you look at it we’re at 0.8 degrees already. Can we afford another 150% of what we already seeing? We are saying we cannot do anymore than double. That’s as much as we can do, and hope to survive.

Q.You’ve gone from scientist to activist – Why? I think if we are going to survive it’s going to depend on our people and that somebody or groups of people have to be able to communicate with the common person to tell them what’s at risk.  We can do it. We have to be firm. Do not allow ourselves to be bullied or bought out. 1.5 to stay alive. 2 degrees won’t work for us.

Q.What is the simplest way to put across the concept of “1.5 to stay alive?
The simplest way is at 2 degrees, we say it’s like flipping a coin (flips a coin): heads or tails?

I wouldn’t have a choice.
Yes. That’s the bad part. Island people never had choices but unfortunately it falls to us to try and protect the future of the planet. Very ironic but paradoxical.

So the little people here have to make the biggest noise?
That’s what it comes down to. Because we will be the first to go.

Is the rest of the world listening?
I would say more countries, not necessarily big countries but more countries, and not just islands, are beginning to understand that the risk is just too great. And that there’s nothing wrong with saying “let’s take 1.5 less and be safe than take 2 degrees and be sorry”.