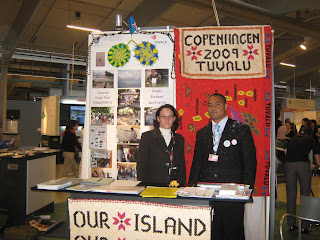 “The only way people will feel our pain is if they came to Tuvalu and saw for themselves what the situation is.”  So says Taukiei Kitala, a climate change activist representing Tuvalu's Association of NGOs (TANGO) in Copenhagen this week.

The fourth smallest island nation in the world, Tuvalu, is boosting the Pacific presence in the hundreds of exhibition stands at the COP15 with the hope of demonstrating to developed countries what the reality of  climate change impacts is on their country.

Kitala says they are expecting a new legally binding agreement for the Kyoto Protocol.

“We hope that the Kyoto Protocol remains but amendments are made to it so that we all can benefit from it,” he said.

He gave an insight into the connection from Tuvaluans for their homeland.  He says there is no talk of relocation despite the rising tides and sea level rise.

“What big countries need to know is that climate threats will make us leave our land and that is why mitigation and adaptation is more important than relocation,” Kitala pointed out.  He hopes a resolution will be found  during the COP15 and the inhibitants of Tuvalu will be saved from having to relocate or becoming the world’s first entire nation of climate refugees.

The main source of income in Tuvalu is the remittances that are received by its sea-farers.

“We have no export market and we want people to see what is actually happening in one of the countries that  is to be discussed during this COP15 and that is why we are giving out booklets and showing pictures and clips to those interested with the effects of climate change in Tuvalu.”

Tuvalu is a small island group of eight coral atolls located midway between Hawaii and Australia. The population of almost 11,000 depend on underground well water as well as rainwater.  Families are finding that due to climate change the underground water is getting saltier and difficult to drink with the rainwater being unrealiable.

Kitala added that during high tides, water comes from every side including from underneath and this just destroys their plantation and crops which are low in supply any way.