Negotiations restart, less than 24 hours before a deal is signed

Copenhagen, 17 December - After almost 12 hours of deadlock in climate change negotiations in Copenhagen, talks resumed Thursday afternoon at ministerial level, as directed by the President of the Conference of the Parties (COP), Danish Prime Minister, Lars Lokke Rasmussen.

The two working groups presented their draft outcome documents to plenary on Wednesday evening after COP was unable to convene for over six hours.

UNFCCC executive secretary Yvo de Boer was encouraged by the effort of the Danish PM to work out a deal through the political process.

“Their deadline is this evening, and it’s only a matter of hours now that we have to come up with a document."

French President, Nicolas Sarkozy, in his country statement appealed to all the leaders of the different regions of the world to meet Thursday evening to bring about some political consensus at the highest level.

“We have less than 24 hours and we have to now consider a compromise text. We can have a working meeting this evening to push this stalled process forward", said Sarkozy.

The European Union and all its 27 members remain convinced that a deal can be sealed, only if China and the U.S sort themselves out.

EU President, Jose Manuel Barosso was optimistic that with the little time available, some consensus should be reached.

“In Rio, the agreement came at the very end after some dramas. We are disappointed with the slow pace of the negotiations but we must not under estimate the progress made in the last two years"

“I am optimistic that we can still reach a deal by Friday (18 Dec) as planned", said Barosso.

Similarly, the U.S Secretary of States, Hillary Clinton is hopeful for a successful outcome here in Copenhagen.  She has been tasked by President Barack Obama to give political leadership to the U.S negotiation team, led by its special climate change envoy, Ambassador Todd Stern.

“After years of diplomacy, we now have to make a decisive decision to provide the foundation of a sustainable world.

“We have now reached a critical juncture in these talks. We understand the talks have faced some difficulties but we are working around the clock to forge a deal", said Secretary of State Clinton.

“We must now reach for common grounds and take the historic step to sign a deal that the world is waiting for. It’s not about us versus them or these groups against another group."

However, she insisted that China and other developing economies must step up and make meaningful reductions. 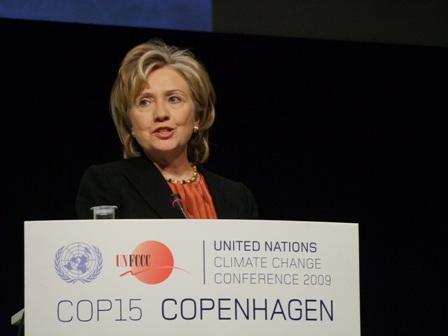 “China needs to commit to transparency, especially after Bali where developing countries agreed to allow for transparency. That is a deal breaker for the United States, especially now when we are trying to define, observe and implement transparency."

“To back away now undermines the whole process", Clinton said.

Responding to calls for commitments to long term financing, Secretary Clinton today announced her government’s intention to raise $100 billion annually from 2020 for adaptation and mitigation.

“The U.S is prepared to work jointly with other developed and developing countries to mobilise 100 billion by 2020. Funding will come from public and private groups, bilateral and multilateral donors and from other alternative sources."

“Support for poor countries cannot be left to the whims of the markets. It is absolutely crucial that this money comes from public sources and is additional to current aid commitments.

“If new and guaranteed climate finance is put on the table, it will help move these fracturing talks closer to a global deal on climate change, said Oxfam.

Earlier, China signalled an operational accord out of reach. Now China's climate change ambassador says China has not given up hope for a deal.

China no longer sees a possibility of achieving an operational accord to tackle global warming this week at the UN climate conference, Reuters reported.

The official said that China instead suggested issuing “a short political declaration of some sort.”

Beijing wants a deal that capture all progress achieved over two years of UN-led negotiations and leave room for swift progress on unresolved areas next year, according to a Chinese official…..ends