Tuvalu PM Fights for Survival of his People 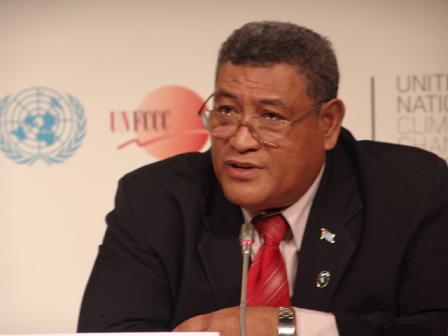 
Copenhagen, 17 December - For vulnerable countries like Tuvalu, the COP15  is a meeting for survival and not a business meeting.  Apisai Ielemia, the Prime Minister of Tuvalu says they have been pressured over the last few days to accept 2 degrees as their target.

“We came to this meeting with high hopes and we will not walk out of Copenhagen having had signed any deal which is more than 2 degrees,” he said.
According to Ielemia, there have been attemps for meetings with developed countries, to encourage them to water down their proposals to endorse 2 degrees.

“I do not know about the other countries, but I do know that Tuvalu will not give in to their demands.  Our proposals have been swept under the carpet and this is not how UNFCCC should be working.”

He demanded for a just and fair system where the vulnerable parties as well as the developed countries could come together and work on an agreement together with equal contributions.

“Leaders who are pushing for 2 degrees should already know from the science about what will happen to the small countries if we sign a deal for more than 1.5 degrees,” he said.

Prime Minister Ielemia believes there is no more waiting for another conference as the decision for the survival of the vulnerable needs to be made here in Copenhagen.

“If not now, then by the time a deal is agreed upon in later conferences, you will be hearing from this part of the world that a whole island nation on the other sided has been completely swallowed up by a tsunami or hurricane.”

“We are making so much noise for major emission cuts and that is because we also have the fundamental rights to live amongst you.” --ENDS