Sharing climate science in the media

By Rosalie Nongebatu - Solomon Islands Broadcasting Corporation
23 May Apia, Samoa - Delegates at the Lessons for Future Action Conference have been reminded of the importance of communicating the Science of Climate in a manner that is culturally considerate and locally relevant.
This was one of the challenges in Communicating Climate Science put forward by the Pacific Climate Change Editor Cherelle Jackson during her presentation under the Information and Awareness Raising Session this morning.
Another challenge Ms Jackson pointed out included the lack of knowledge and background in Science by pacific journalists, who usually learn on the job before communicating the information to the community. 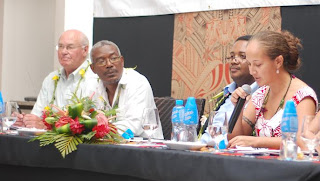 “We have to teach and understand the science of climate change and then relate this to our audiences.”
Ms Jackson says although outreach programs and awareness campaigns are of great value to personally communicating the science, the most effective avenue would be the mass media whether it be radio, television, online or newspapers.
According to a study carried out by Ms Jackson at the Oxford University on climate change journalism in the pacific, weddings and food were mostly reported on while climate change and the environment were not a priority. Ms Jackson’s survey was carried out in newspapers produced across five of the pacific island countries.
“This was a curious finding, although unsurprising, as you would think climate change would be a priority issue for pacific island newspapers seeing that they are experiencing first and worst some of the impacts of climate change and you would think their audiences would be interested in the issue.”
Ms Jackson also attributed the low numbers of communicating climate science to three challenges which included the lack of science knowledge by journalists, the need for scientists to communicate information clearly to the media and the lack of access to climate change resources in pacific island countries.
She also quoted a study done by anthropologist Dr Peter Rudiak-Gould on the changing behaviour of the people of Marshall Islands towards climate change as saying that concern for climate change isn’t automatic, even for those in the highly vulnerable areas.
She said according to the research, foreign educators can help by teaching people about the science of climate change but only local educators can help people make sense of the issue in terms of local concerns such as loss of tradition.
Ms Jackson also made a few suggestions when communicating science which include simplifying the science for non specialists to understand, but not to point of irrelavance and not to use jargon.
She also suggested scientists to localise, and humanise the information so that people could understand better.