29 November 2012, Doha, Qatar – Kosrae, one of the Federated States of Micronesia, was featured during a special event coordinated by the United Nations University, on Loss and Damage at the UN Climate negotiations in Doha.  The State has prepared a case study based on the loss and damage due to the coastal impacts upon the residents, from sea level rise and storm surges.

Loss and Damage refers to a range of damage and permanent loss associated with certain climate change impacts under the United Nations Framework for the Convention on Climate Change (UNFCCC).  These can include impacts from extreme weather events such as tropic cyclones or floods, as well as from slow onset events such as sea level rise or ocean acidification.

70% of Micronesia’s population and infrastructure is located on the coast.  In Kosrae the residents are experiencing damage to their houses and infrastructure, affecting their crops and trees, as well as a loss of beaches.

“In our study that visited 363 households, 87% of the people we surveyed experienced coastal erosion with 80% of them saying it affected their household,” said Simpson Abraham, the National Coordinator of the PacificAdaptation to Climate Change Project in FSM.

The project is working to improve the existing coastal road design reinforcing them with new drainage solutions which take into account flooding risks from increased rainfall and sea level rise.

“When we asked people if they were adapting to climate change, 92% said the measures are not enough and will entail extra costs and 40% haven’t done anything to adapt to climate change, they lacked resources or just didn’t know what to do.”

Some of the adaptation options that households did carry out include building seawalls, filled land to fortify the coast, planted trees and elevated their homes.

Other case studies presented at the side event were from Bangladesh that looked at loss and damage from salinity, Bhutan that focused on changing monsoon patterns, The Gambia centering on drought, Kenya on the 2011 floods, and Micronesia on loss and damage associated with coastal erosion. 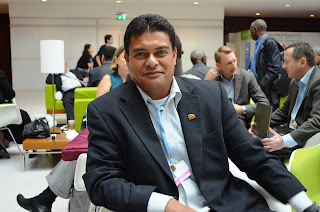 “One query that was directed to me was – what are you doing as far as adaptation in the future?” said Abraham.

Under the UNFCCC, the Pacific through the Alliance of Small Island States has been advocating for the establishment of an international mechanism that would address the negative impacts associated with Loss and Damage.

The United Nations University Institute for Environment and Human Security hosted the side event on Loss and Damage on Monday, 26 November at the Qatar National Convention Centre.