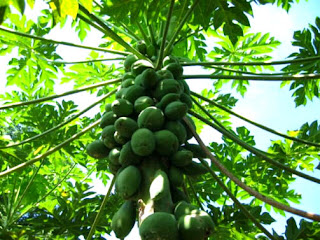 11 July 2013 Nadi, Fiji - A commercial agriculture project manager in Fiji says climate change will exacerbate risks to the industry.
Australian Center for International Agriculture Research, ACIAR, Fiji Papaya Project Manager, Kyle Stice said because of these challenges they are now trying to carry out research into natural disasters, so that a new strategy is developed to address the challenges created by the natural disasters.

Stice spoke on the issue of integrating climate change and disaster risk management in the agriculture sector. His presentation was based on a case study on the Fiji Papaya Project.

He said over the last four years natural disasters in Fiji have had a drastic impact, not only on the papaya farmers, but exporters as well.

Stice says it takes about 9 months for a papaya tree to bear fruit and within these four years the money made after the natural disasters, were used to offset the cost of damages and they have been left with a very unhealthy net income.

However, he said most of the Papaya farmers are also doing multi-cropping, in their farm, so they were able to generate some form of income, while waiting for the rehabilitation of their papaya farms.

Stice said their exporters were hardest hit by the recent natural disasters in 2012, especially those that are exclusively papaya exporters. He said their exclusive exporters lost business completely, including assets which they've acquired over time.

He said the current system put in place for disaster rehabilitation does not take into consideration such situations.

Stice said this illustrates that the commercial agriculture as an industry can be affected negatively by natural disasters.

He says the only way to minimise the negative effects of climate change is to plan for it.

"It is important that as businesses, whether you are a farmer or exporter that we start including the likelihood of a natural disaster into our planning, as farmers the way we manage our money, as exporters and the way we use our money so that we are not in a position that we are only relying on the government or an aid agency to come in and rehabilitate, so hopefully the industry is taking some of these messages on"

Stice added that the negative impact on the industry has also impacted on the confidence of farmers and exporters, and he predicted the numbers to drop.

"Unfortunately there's been a level of discouragement; we will see the number of farmers and exporters decrease because of these series of natural disasters at least for a few years, so confidence in papaya farming and exporting has dropped"