Is the Pacific doing enough in its disaster early warning systems? 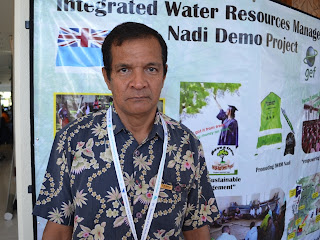 11 July, 2013, Nadi, Fiji - A lot of progress has been made in the Pacific in the area of early warning systems (EWS), however more needs to be done, says Rajendra Prasad, the UNESCO/IOC Programme Officer for DRR and Tsunami Warning.


Prasad says countries in the Pacific do vary on their level of EWS, but says the progress and developments done within the region has been going reasonably well.


“there are several natural hazards such as tropical cyclones, flash floods, droughts and tsunami which each country’s state of EWS differs. But for us in Fiji, we have reasonably good early warning systems for tropical cyclones,” Prasad said.


Although there were some weaknesses such as incidences of over warnings, under warnings, late warnings or too early warnings, Prasad said it has been a real challenge for the Pacific with hazards like tsunami where information could reach the public through the media without proper assessment and causes panic and anxiety amongst people.


He stressed that for different hazards, different countries have their own EWS situation, some are well prepared more than others.


He highlighted that Solomon Islands is one of the countries that has one of the best EWS practices in place where the integration of the Meteorological services and National Disaster Management Office could respond in the earliest time to its EWS.


Prasad further highlighted that the Pacific has a long way to go in addressing certain hazards like that of tsunami, while with others like tropical cyclones, they are well equipped and have in place proper EWS.


However he said there is certainly a need for improvement to ensure EWS are in place to counter any type of hazards.


“We have a lot of way to go in terms of improvements on EWS but the good part is the Pacific Early Warning Centre will in the near future cease to issue warnings and people can get that quickly from their national met services and integrate that information with the national disaster divisions to organise the respond to EWS.”


He stressed that despite the challenges Pacific island countries face with the resources they have available, they have done a lot and this should be maintained and improved.


When asked on how prepared the Pacific is in terms of its EWS for natural hazards, Prasad said it depends entirely on the type of hazards.


He said if he is going to rank the pacific on scale of one to ten with ten being the highest, the Pacific would sit between 6 and 7.


However he said for tropical cyclones he would rank the pacific between 8 and 9. For flash floods he ranked it between 5-6 depending on the locality of the area and for tsunami, he ranked it below 5.


“This integration process (between climate change and disaster management) is like we are planting a seed and surely it will germinate and mature and bear fruit. Once it starts to grow, we will just have to look after it and by the end of the day it will enable us to tackle multi-hazards when it comes.”