Missing beach in Majuro restores passion for the islands 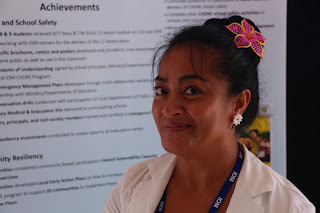 9 July 2013, Nadi, Fiji - Canita Rilometo Swigert, a trainer on disaster risk management with the International Organization for Migration (IOM) in Pohnpei and the Marshall Islands is attending the Joint meeting of the 2013 Pacific Platform for Disaster Risk Management and Pacific Climate Change Roundtable. It is her first time to have attended a Pacific Climate Change event and she excitedly talks about all the people she is meeting, the connections she is making, and all that she is learning that she can take back home with her.


Just over two years ago she rediscovered a passion for the islands and her people that she had long forgotten that she had. Before she went to work for the International Organization for Migration (IOM)in 2011 CanitaRilometoSwigert held several jobs including a 20 year stint in the U.S. Army.


She says that when she was younger she was passionate about the environment and about island issues but when she left the Marshall Islands the pressures of everyday living superceded.


“My friends used to laugh at me,” she said, “because whenever we walked to school I always picked up trash on the beach. Whenever I had a backpack you could be sure there would be trash in it.”


She also started a youth group in Majuro. One of the many responsibilities the youth group took on was to cleanup trash from a beach near the airport. 20 years later it was that beach that brought her passion for the islands and its people back.


“When I first went to work for IOM I was just worried about learning what I needed to teach,” she said. “I said to myself, ‘I was in the Army. I can do this job’” but then IOM sent her to Majuro to teach ninth graders there. While there, she went to visit what she had come to think of as her beach. “When I saw what I saw there it changed everything for me,” she exclaimed. “It wasn’t there. The beach was gone. We cleaned that beach and we planted trees there but it’s gone,” she lamented.


It was an epiphany for her.


Candida is a trainer for CADRE, which is an acronym for Climate Adaptation, Disaster Risk Reduction, and Education. CADRE is an information campaign to raise awareness in FSM and RMI communities of the risks of natural disasters and climate change and also to help communities to develop disaster risk plans.


Disaster risk assessment teams go into communities and conduct risk assessments. They then work with the community to help them come up with their own adaptation measures and emergency plans. So far 13 communities have completed community based, participatory Hazard Vulnerability Capacity Mapping exercises. They have also developed local early action plans on how to increase community resilience.


Canita works only in Pohnpei and RMI but the CADRE program is also in operation in Kosrae, Chuuk, and Yap. Australian AID provided 100 percent of the funding for the three year program which is scheduled to conclude in 2015.


Canita says that she hopes that governments in both countries will want to continue the program when it ends. She said that she has had a few conversations along those lines with people in high places that she finds encouraging and she will continue to advocate for it.


Canita has also involved herself in community issues that have nothing to do with her job but everything to do with who she is and the passion that was restored to her because of a missing beach in Majuro.