Samoa environment boss on a mission in Fiji

By AsenatiTaugasoloSemu, Press Secretariat of the Government of Samoa: http://www.savalinews.com 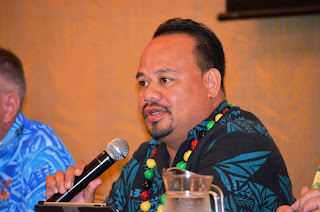 9 July 2013, Nadi, Fiji - The CEO for Samoa’s Ministry of National Resources and Environment is a man on a mission in Nadi this week.


The meeting is to facilitate the on-going discussions between the disaster risk management and climate change communities in the Pacific.


For Taulealeausumai, the joint meeting is a viable opportunity to advocate partnership in all levels in the Pacific.


“I don’t mean partnership between donors and recipients but partnership from the grassroot level in villages; between private sector and government ministries; villages and non government organisations”


The CEO pointed out some projects funded by his ministry for some NGOs and government corporations to further prove his point.


“We have made budget allocations for the local Red Cross Water Tank Projects. We give them the fund and they implement the project.


“We also allocated budget for the plumbers association to assist with their capacity building so that they can assist the community with plumbing needs.”


Taulealeausumai said this is the kind of partnership that directly helps the community and cater for the shortage of staff at the Ministry.


“This is to ensure the good overseeing and monitoring of projects and programmes.”


The CEO said discussions and negotiations about partnership has long been practiced in Samoa.


“From the discussions I’ve heard so far, it seems that Samoa is way ahead,” said Taulealeausumai.


This committee is chaired by Prime Minister Tuilaepa Sailele Malielegaoi and comprises all Cabinet Ministers and Chief Executive Officers.


“The disaster risk management is similar to our national CDC. I hear people here asking about the process of high level monitoring which is exactly the role of CDC to monitor, review and follow up on project assigned to Ministries. Just recently the CDC made a MDG (Millennium Development Goal) review to discuss and follow up on Ministries that didn’t achieve the MDG.”


About the ongoing negotiations for the integrated strategy, Taulealeausumai said there are commonalities in disaster risk management and climate change


“In our Ministry, we include climate change when implementing projects and programmes on disaster risk management and vice versa,” said the CEO.


“It’s important that this meeting should look at the possibilities to either marry the two sectors and to see if that is effective or co-implement to see if both can work together. There are many commonalities in the two sectors at the national level, mainly in the implementation arrangement, but not in the regional level.”


But Taulealeausumai was positive about the negotiations and acquiring of funds.


“Its good to have the two separate so that donor partners can deal directly with each sector.”


Taulealeausumai also said the monitoring role of the Forum is very important.


“I rather that the central planning is aware and familiar with all the process than not aware at all,” he said