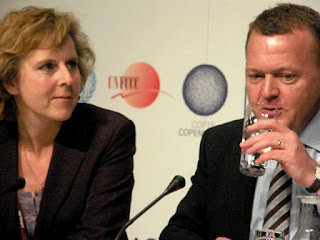 Copenhagen, 16 December - The High Level Segment session of the global climate change talks in Copenhagen was delayed by forty minutes Wednesday as China, India, Brazil, Sudan, South Africa and Ecuador intervened and questioned the chair on a new draft text introduced by Denmark.

China and Brazil intervened a number of times seeking an assurance from the Danish PM, Lars Lokke Rasmussen that the two draft texts negotiated by the parties will form the basis of the final outcome of the Copenhagen talks.

“With respect to you and other distinguished leaders here, we are not trying to obstruct the progress of the process.

“We are concerned with the presidency putting forward a text without fully consulting with the parties, said a Chinese delegate.

In support, Brazil and India lamented the hard work put into the marathon negotiations, from last night to seven this morning.

“This is not just a matter of procedures but we want the presidency and the host to respect the views of the 192 parties present here, said the Indian official.

“The outcome of this process should be state driven and we will be concerned if a text is made outside this process, said the Indian delegate.

China, maintains that ‘substantative’ discussions need to be urgently done on what will form the final outcome of the Copenhagen deal.

“Unfortunately the presidency put something from the sky – it’s a matter of serious concern to us and an injustice to the process.

“How can she put that forward a text without consulting with the two important working groups? We need you to clarify that the output of the AWG- LCA, AWG-KP will form the only legitimate basis for discussion in the negotiations, said the Chinese official.

The Danish PM had to consult with the UNFCCC executive secretary on a few occasions to get directions on how to move the discussion.

Even after assurances by Yvo de Boer that the Conference of the Party would convene later in the day to discuss the two negotiated texts, the Group of 77 and China countries, continued to raise their objections through points of order.

PM Rasmussen then assured all the parties that the session was dedicated to world leaders for their statements.

“It’s not our intent to put any text from the sky. We are talking about a two track text that will be discussed in the COP plenary. The world is watching us and expects a climate change deal from us, so we should move on.

The Danish Prime Minister took over the presidency of the High Level Segment from his climate change negotiations minister, Connie Hedegaard.