Pacific countries will negotiate to the last minute 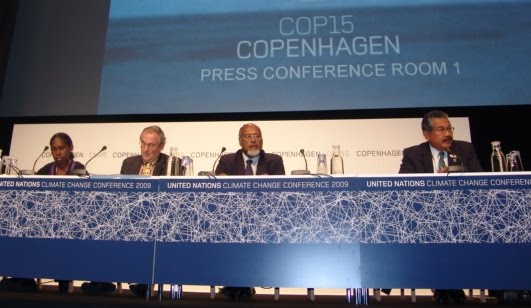 Copenhagen, 16 December - As the clock winds down on a climate change agreement being reached at Copenhagen, Pacific Island leaders say they will continue to negotiate until the last minute.

Vanuatu’s Prime Minister Edward Natapei says even with 48 hours left and still no clear progress in the talks, he was hopeful that a settlement could be reached by Friday.

“The developing countries in the Pacific are hopeful that we can still negotiate for 1.5 degrees. It’s a matter of survival…that we continue to negotiate to the last minute,” Natapei told reporters at a press conference.

He said Vanuatu continued to give its support to the proposal put on the table by the Alliance of Small Islands States, (AOSIS) despite the nature of the talks.

Key to the AOSIS proposal is a seven year extension to the Kyoto Protocol, the establishment of a new protocol agreement and the reduction of emissions to keep global warming below 1.5 degrees Celsius and all this to be tied to a legally binding agreement.

Although one of the region’s biggest countries Papua New Guinea appears to have moved away from the AOSIS proposal, its neighbours Vanuatu and Solomon Islands are still ardent supporters of the draft agreement.

The President of Palau Johnson Toribiong has also given his backing to AOSIS and he labeled developing countries, China and India, as unjustified for not supporting moves to keep global warming below 1.5 degrees Celsius.

“I ask world leaders to focus at the clear and present danger of low lying islands,” said Toribiong.

AOSIS says if global warming rises to two degrees, the rise in sea level will put a number of Pacific Island countries underwater.

With the talks into its critical period Toribiong says too many big countries saw climate change as an “imaginary threat.”

“For those in the ocean can feel the roaring threat of the rising sea level.”

He says the danger of the rising sea levels have forced many Pacific Islanders to relocate their homes.