Copenhagen, 18 December - One of the leading strong advocates for the Alliance of Small Island States (AOSIS), Grenada’s representative to the United Nations, Ambassador Dessima Williams has refuted claims that the United States is pressuring AOSIS to abandon its 1.5 degrees, the ceiling for global temperatures.
Ambassador Williams admitted that the U.S President, Barack Obama has spoken to her Prime Minister, Tilman Thomas to discuss the AOSIS position.

“My PM had conversation with President Obama Wednesday evening and indicated to him that all of the AOSIS position remains on the table.  President Obama did not indicate any areas that need ‘heavy lifting’ from AOSIS", Ambassador Williams told journalists. 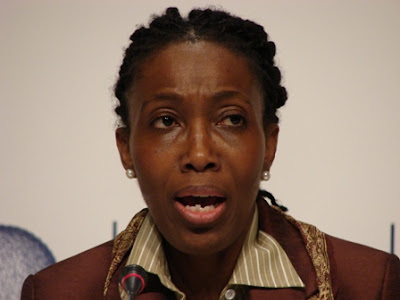 Immediately after the press conference, Ambassador Williams and a group of AOSIS senior officials were scheduled to speak with major European countries to discuss the 1.5 degrees to stay alive position.  The European Union agrees that the global temperature must be below two degrees but has not put any specific number on the table.

"1.5 and 2 degrees are currently on the draft text now being negotiated, but there is increasing consensus for ‘below two degrees", said Yvo de Boer, UNFCCC executive secretary.

PM Thomas of Grenada, in his statement at the High Level Segment on behalf of the 43 AOSIS members, maintained that a Copenhagen climate deal must ‘proceed along a path that will restrict long term temperature increases to well below 1.5 degrees celsius above pre-industrialised levels.