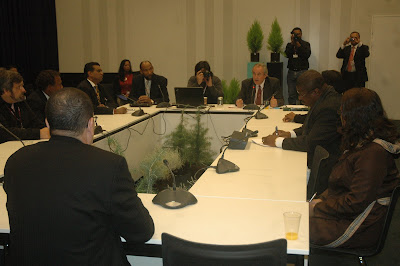 Solomon Islands has put its name down to be part of a Pacific Caribbean arrangement on clean energy.  The deal will set up a mechanism to assist countries in the Pacific and Caribbean to access cleaner and more efficient energy sources.

With the ongoing climate change talks at the UN meeting still in free fall, the Friday morning signing was the week’s first good news for Pacific and the small island development developing states – in a long week dominated by snow and even frostier like negotiations.

The leader of the Solomon Islands delegation says the initiative would not only go towards reducing greenhouse gases, but it would also result in energy efficiency for its members, as well as being more cost effective for the economies of small island countries.

“We spend something like 70 percent of our foreign reserves on purchasing fuel,” this arrangement will take pressure off our finances,” says Environment Minister Gordon Darcy Lilo.

Millions of dollars are spent on importing diesel to run generators that provide the main source of electricity to Solomon Islanders.

Solomon Islands deputy director of energy Nixon Kua says the arrangement will allow his country to gain access to new developments in the energy sector.

“There are some technology projects that we,  for us in the Solomon Islands can take on to mitigate climate change - hydro, geothermal….we have potential in geothermal and we need to further investigate this,” says Kua.

The ultimate aim of SIDS Dock, as the initiative is called, is to increase energy efficiency by 25 percent and to generate a minimum of 50 per cent of electric power from renewable sources, as well as a 20-30 percent reduction in the transportation of fuel.  All this is to be achieved by 2033.  SIDS Dock will be jointly managed by the Secretariat of the Pacific Regional Environment Programme, SPREP and the Caribbean Community Climate Change Center.  Kua says an important feature of SIDS Dock is provides a platform for the trade in carbon as well as access to other renewable energy sources.

“It will be a docking station for overseas countries and companies to deal with us on energy and this will benefit us.”