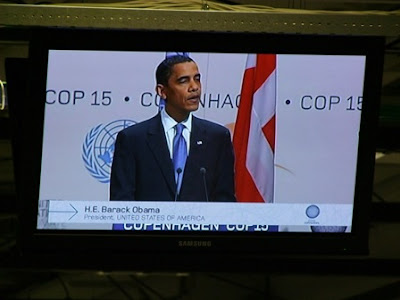 Copenhagen, 18 December - World leaders present in Copenhagen Friday, with the hope of signing a legally binding climate change deal, will have to settle for a political accord.  This was hinted by most of the leaders that took the podium at the High Level Segment today, including United States President, Barack Obama.

“After months of talk and two weeks of negotiations, I believe the pieces of that accord are now clear."

President Obama said, “This is not a perfect agreement and no country will get everything it wants.
The bottom line is – we can embrace this accord, take a substantial step forward and continue to refine and build on its foundation.

“We can do that and everyone who is in this room will be part of an historic endeavour – one that makes life better for our children and grandchildren", said Obama.

He refused to budge from his position saying the United States will continue to invest in renewable energy and pursue a clean energy economy.

“America is going to continue on this course of action no matter what happens here in Copenhagen.
For the United States there will be no change in position until all major economies put forward decisive national actions on emissions reductions and ‘begin to turn the corner on climate change.’

“We have charted our course, we have made our commitments and we will do what we say", said Obama.

Three positions pushed by the Obama administration in the climate change talks are – major economies must put forward decisive national actions on emissions targets, a mechanism to review commitments and exchange of information in a transparent manner and a financing package for mitigation and adaptation.

US Secretary of State, Hilary Clinton Thursday announced a fast start funding of $10 billion for 2012 and the U.S will mobilise $100 billion in financing by 2020.

European Union President, Jose Manuel Barroso was less optimistic but hopes that COP16 in Mexico will ‘progress discussions on transparency and internationalisation of actions’ as provided for in the Bali Plan of Action.

“What remains in our sight is a critical milestone. It’s now obvious that we cannot get everything that we hoped for."

Prime Minister Tilman Thomas of Grenada speaking on behalf of the Alliance of Small Island States (AOSIS) expressed the disappointment of the 43 member group saying whatever political outcome that will come out of Copenhagen is ‘not under the mandate of the Bali Plan of Action.’

“It is not a legally binding outcome.

The response, so far for small island states is – the outcome document is ‘inadequate.’  However, ‘We hope the post Copenhagen period will be characterised by the full implementation of the political will shown here to save the planet.”

“More efforts should be on getting the job done and not only get the talks done", said PM Thomas.

“We are united in purpose. Now is the time for us to be united in action."

India, one of the more vocal major developing economies within the G77 group said while the accord ‘falls short of expectations, it can be regarded as a significant milestone.’

“India supports calls for subsequent negotiations towards building a truly global and genuinely collaborative response to climate change being concluded in 2010."

The Indian Prime Minister, Manmohan Singh said all effort should now be diverted to continue post Copenhagen negotiations on the basis of the Bali mandate