By Makereta Komai for Climate Pasifika in Bonn, Germany
03 JUNE 2010 Bonn, Germany --- The Alliance of Small Island States (AOSIS) on Tuesday called on climate change negotiators from around the world gathered in the German city of Bonn to recommit to achieving an ambitious outcome in Cancun, Mexico later this year.
This goal is consistent with the Bali Action Plan and has become critical in the protection of Small Island Developing States (SIDS), the most vulnerable countries in climate change.
AOSIS is concerned with the consistent lowering of expectations for Cancun in recent weeks. These negotiations commence at the end of the Pacific cyclone and at the start of the Atlantic hurricane seasons, both of which bring death and destruction.
In the face of press statements that seek to dismiss the importance and ambition of Cancun, the chair of AOSIS, Ambassador Dessima Williams, stated: “We need the most ambitious, comprehensive, legally-binding and just outcome to secure commitments.”
“Such ambition remains our mandate and we continue to honour the wisdom and political call of our leaders,” said the Grenada diplomat, referring to the 2009 Declaration of the AOSIS Heads of State and Government. 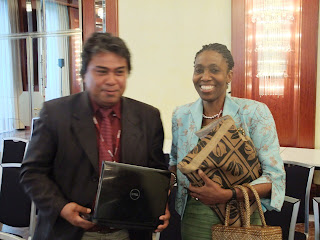 AOSIS maintains that these ambitions are well founded in science and in the experiences of the small island states and others around the world.
In the ensuing six months since Copenhagen, emissions may have increased in some parts of the world and overall environmental conditions may have worsened.
A Global governance architecture for managing climate change remains of great urgency and requires compelling action to stem climate change deterioration for everyone, but especially for small island states.
"The Copenhagen meeting may have postponed an outcome for at least a year, but it did not postpone the impacts of climate change," said Yvo de Boer, Executive Secretary of the UN Framework Convention on Climate Change (UNFCCC).
Two working groups will meet during the Bonn gathering, with one focusing on a new negotiating text and the other concentrating on emissions reduction commitments for the 37 industrialised countries that have ratified the Kyoto Protocol for the period beyond 2012.
Taking action now to avoid the adverse effects of climate change is the least cost alternative to protecting everyone and to ensuring economic sustainability.


Ms Komai will be covering the Bonn negotiations from 31 May – 11 June 2010, thanks to support from Secretariat of the Pacific Regional Environment Programme (SPREP) and the World Wide Fund for Nature (WWF). She will provide daily coverage of the negotiations via PACNEWS and the SPREP website www.sprep.org and the climate pasifika blogspot, http://climatepasifika.blogspot.com