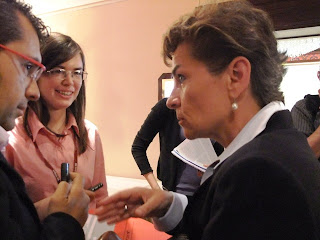 By Makereta Komai for Climate Pasifika in
09 June 2010, , --- There is a mood of optimism here in as negotiations reach the mid way mark of the final week of the climate change talks.
One of the achievements, according to the incoming executive secretary of the UNFCCC Secretariat, Christiana Figueres, is the ability to get opposing Parties to ‘reach out’ to each other and talk.
Figueres, a Costa Rican with 15 years of distinguished career in climate change negotiations, said political will has been the key to advancing some of the ‘difficult’ issues.

“There is already a process underway here of rebuilding trust and constructive conversations are taking place. Negotiators are reaching out to each other to not only understand each other but to understand the interests behind that position.
“I call this process the miracle of negotiations. We welcome this process and we will certainly build upon it in , said Figueres.
She was addressing a media seminar for journalists from developing countries attending the climate change talks.

The new UN climate change chief is however apprehensive about the emissions reduction commitments of some Annex 1 (developed) countries.

“Certainly, the pledges we have on the table now are not sufficient to either meet the 2 degrees pledges in Copenhagen Accord as it will not guarantee the survival of those who are most vulnerable and the poorest.

And, she assured these rich countries understand their responsibility to improve on their commitments.
“I would not put a date on it but I would see it as a gradual incremental effort. I see it in the context of countries being aware of their responsibilities and living up to them in a timely fashion, Figueres said.

Its joint assessment of the negotiations suggests that there appears to be widening gaps with developed countries working towards the dismantling of the Kyoto Protocol (KP), to escape a second commitment period.
“Rather than honour the bargain, they are now seeking to move favoured elements of the Protocol (e.g. markets) into a new agreement under the ad hoc working group on long term co-operative action (AWG-LCA).

Under the Bali Roadmap, it was agreed that negotiations under the Kyoto Protocol would continue and developed countries (Annex 1) would adopt a second commitment period, commencing in 2013.

In addition, developed countries including the , which is not party to KP, would undertake comparable commitments under the AWG-LCA.
After more than three years of negotiations under the Protocol, the current pledges by developed countries would result in a reduction of only 17-25 percent by 2020 from 1990 levels, according to the UNFCCC Secretariat. This is far lower than the 40-50 percent cuts demanded by developing countries.

Another ‘loophole’ exploited by developed countries is the ‘surplus allowance’ (earned by some countries, especially Russia, for emitting less than their allocated share) and land-use accounting rules, according to the international NGO’s assessment.

“So while foot dragging on their targets, developed countries are pushing aggressively in the AWG-KP to finalise weak rules on land-use, land-use change and forests (LULUCF).
Developed countries are also proposing that accounting for forest management remains voluntary thereby allowing the developed (Annex 1) countries to simply not account for any emissions increases.
Ms Komai will be covering the Bonn Climate Change negotiations from 31 May – 11 June 2010, thanks to support from Secretariat of the Pacific Regional Environment Programme (SPREP) and the World Wide Fund for Nature (WWF). She will provide daily coverage of the negotiations via PACNEWS and the SPREP website www.sprep.org, the climate pasifika blogspot, http://climatepasifika.blogspot.com and the PINA Green page http://green.pina.com.fj/