has included civil society representation on its delegation here in for the climate change talks. Marstella Jack, the island’s former Attorney General and activist explains to Climate Pasifika’s Makereta Komai her specific role in the negotiations.
Marstella: I am part of the government delegation. That’s the beauty of climate change negotiations in the Pacific – it brings the government and civil societies together and we are on the same page. We are here to support our government’s position to keep a tab of hundreds of meetings that are happening simultaneously.
Q: So, as an NGO, what are the issues you are pursuing at this climate change talks in ?
Marstella:  I am here as part of Climate Action Network International, working with CCAN (Cook Islands Climate Action Network) and TUCAN (Tuvalu Climate Action Network) to establish a regional Climate action Network.  The issues that we follow will have to be aligned with CAN’s interests.  Last year we had some difficulties, the overall position of CAN was 2.0 degrees average in global temperature and as you know we were advocating for 1.5 degrees. That has changed now.
Q: How did you do that?
Marstella: After so many reports that have now come out, CAN International has now realised that they  need to readjust their position but the overarching issues that we follow is really issues that are coming from developing countries – on finance, mitigation, adaptation, capacity building. So it’s an advantage for us in the Pacific, we have such weak civil societies. There is really no NGO or group that is dedicated solely to climate change work in the Pacific, I may be wrong but there is none right now. We have some environmental NGOs that include CC in their work but not necessarily dedicated to climate change per say.
I have drafted the articles and charter of the association and we are looking at registering it in . Once that is done, we will need to look for funds to get a co-ordinator on board. At the same time, we should consider applying for observer status at the Pacific Islands Forum.
Q: How far have you advanced discussions here in for the setting up of a CAN in the Pacific?
Marstella: I have good responses from CCAN and TUCAN. Now we have expressing interest to join us. They’ve given us the go ahead to set up what we call a regional node. It’s just our laid back attitude in the Pacific that we are taking our time to set up. We want to get that done when comes on board. I have approached the and a lady in the delegation is keen on the idea. If we get the Pacific node up and running, new organisations can then join us. 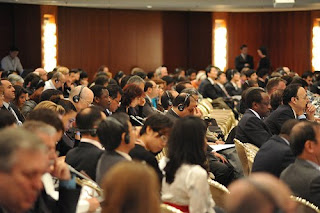 Q: How many Pacific countries do you need to express interest to join before you can operate?
Marstella: Just two or three really and we can start. I have enough right now but it’s better to have more from the rest of the Pacific Islands so that we become inclusive and representative of the whole region, more so the low lying islands of Marshalls, Tuvalu and Kiribati. We want them to be involved because they need to be the ones carrying the torch for us in the region. We should be able to get that done this year, hopefully before August. I am waiting for Reverend Lusama to get back to me on the charter and to see what we need to do before we register in as a regional organisation. This is issue focused but when you look at climate change, it is cross cutting. If we can get this up and running, then we can partner up with other organisations. This is the first time that we have to come together to say enough is enough. We need to be very focused, strong and build our capacity. Climate change demands us as NGOs and governments to come together to demand action from the polluters.
Q: From your observations here and previous negotiations, do you think our Pacific negotiators are doing enough?
Marstella:  I am wearing a government badge but it is safe for me to say no.  Even my government can say no.  Sometimes we want to make some positions but we have to go back to capitals.  And people back home are talking to the Chinese, the Australians and other major donors and this becomes difficult.  We are looking at ways to say look this is our only issue. You think of any development issue and climate change is impacting on it.
I think the problem is really capacity to understand the issues. When I came here last year I was overwhelmed with the issues discussed here. I thought I could handle it but it was too overwhelming I had to do a lot of reading to understand what they are talking about. I am privileged to be part of CAN network because they have experts in the different areas that we can benefit from. They understand our limitations and are willing to help us with capacity building. If not for , our voice would be non-existent at these kinds of negotiations. I am so proud of . My government also has a strong position on this. We have told our government do not even turn your head to the Copenhagen Accord.
Q: Your government has not signed up to the Accord?
Marstella: We just think it’s full of baloney. It’s not what we are after and does not have what we are after.
Q: How about the argument that this is at least a starting point for an agreement?
Marstella: A starting point for what? The current pledges right now are as much as 4 degrees...is that the starting point? The current pledges are not ambitious enough. We are selling ourselves short if we accept the Accord and unfortunately some of our countries in the region have. That is why there needs to be recognition in the region that climate region is the only thing we have.
Q: Is it then strong political leadership that we need to have?
Marstella: Definitely, that is what we need. When they heard the $100 billion, for us in the Pacific that is a lot of money. But if you look at all developing countries, our organisation calculated that it comes down to $20 per person, if you were to divide that amongst all developing countries. What are you going to do with $20? As you know what happened in , the climate change position our Leaders came up with was pretty atrocious and now we find out there was breakdown of communications. This is an issue that we as civil societies need to partner with government to attack the issue. I came with my delegation and offered my services to them. I am an attorney and told them if you need me to help out, just tell me. For me to have this badge and access these meetings has helped to build my capacity. Climate change is an issue that we cannot be screaming at each other from opposing sides.
Ms Komai will be covering the Bonn Climate Change negotiations from 31 May – 11 June 2010, thanks to support from Secretariat of the Pacific Regional Environment Programme (SPREP) and the World Wide Fund for Nature (WWF). She will provide daily coverage of the negotiations via PACNEWS and the SPREP website www.sprep.org, the climate pasifika blogspot, http://climatepasifika.blogspot.com and the PINA Green page http://green.pina.com.fj/