Negotiations on track for 4 degrees rise in global temperatures 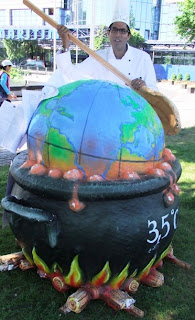 Press Release from Climate Action Network International
07 June 2010, Bonn, Germany – A week after UN climate talks in Bonn, Germany, civil society organisations around the globe have released a statement saying the world is on track for a 4 degrees increase in temperatures by 2100.
The NGOs under the umbrella of the Climate Action Network (CAN) International made their analysis based on the state of negotiations currently underway in Bonn.
The analysis revealed grave concerns that the negotiations are headed toward a world with no meaningful international agreement to control climate change.
“Such a system would lead to 4 degrees of warming and catastrophic climate change impacts, according to a joint statement issued by the group of NGOs.
Many rich countries are seeking to replace the current system in place to tackle the problem – doing away with the legally binding Kyoto Protocol and replacing it with a weaker system, which is based on pledges.
“The system advanced by many developed countries offers the worst of both worlds – a system with no science based targets for developed countries and with inadequate pledges, expansive loopholes and carbon markets allowing them to shift the burden further to poor countries, said Meena Raman from Third World Network.
Matthew Stilwell of the Institute of Governance and Sustainable Development if the European Union backs down on the Kyoto Protocol, ‘that would be disaster for international law and the planet.’
The Pan African Climate Justice Alliance said the negotiations need to be open and accessible.
“It is deeply concerning that the Bali Roadmap is not being honoured and that the vulnerable countries are being sidelined, said Mithika Mwenda.