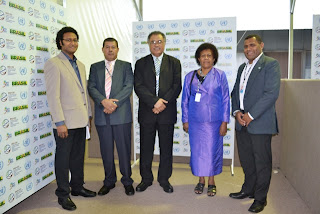 The ‘special case’ of SIDS is reflected in three paragraphs of the draft text now negotiated by 190 countries at the Rio+20 conference, currently underway in the Brazilian city, host of a similar conference, 20 years ago.

Fiji’s head of delegation to the PrepCom meeting, Peter Wise told PACNEWS there appears to be general agreement in principle on the recognition of the special case of SIDS, which covers most of the small island nations of the Pacific.

The draft text calls for continued recognition of SIDS special status in view of their unique and particular vulnerabilities, including their small size, remoteness, narrow resources and exposure to global environment challenges and external economic shocks.

If the three paragraphs are endorsed, a third international conference for the Sustainable Development of Small Island Developing States will be convened in 2014.

Mr. Wise said Fiji and Samoa have put up their hands to host this major SIDS conference in two years time.

“That is another issue we are following closely here in Rio. If the paragraphs recognising the special case of SIDS are reaffirmed in the outcomes statement, then we will await a decision on hosting of this major international conference.”

Support for Fiji and other PSIDS has come from the G77 and China group, of which most of them belong to in the negotiations. The European Union has come on board to support the proposed meetings of SIDS but the United States remains to be convinced of its necessity.

On the hosting of the conference, it is now the turn of the Pacific since the Caribbean and the Indian Ocean have had their turn, in Barbados (1994) and Mauritius (2005) respectively.

“Fiji and Samoa have expressed their interest to host this meeting,” said Mr Wise.

The other key issue the Fiji delegation in Rio are keenly following is the issue of ‘blue economy’ - the sustainable management and equitable sharing of marine and ocean resources as an integral component of the ‘green economy.’ The blue economy prioritises fisheries and oceans.

Also represented at the Rio+20 conference is Silio Lalaqila from Natewa in Cakaudrove, to receive the prestigious UNDP Equator Prize 2012. Lalaqila is representing the Sisi Initiative Site Support Group in Natewa, a community based Important Bird Area (IBA) established in 2006 to preserve bird and wildlife in Natewa. The project is being assisted by Bird Life International.