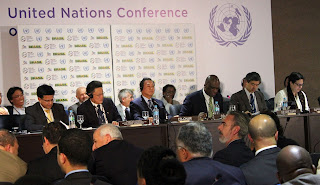 16 June 2012, Rio de Janeiro - Pacific Small Island Developing States (PSIDS) have a reason to celebrate now that their ‘special case’ has been reaffirmed in the draft text at the close of the PrepCom meeting Friday in Rio de Janeiro.
Solomon Islands Permanent Representative to the United Nations, Ambassador Colin Beck was ‘upbeat but cautious.


“We have not come here to create new principles but to address new emerging issues and to take board where the gaps are in the last 20 years. The litmus test is where and how far commitments to implementation will go. This will more or less determine the success of the Rio meeting, said Ambassador Beck


The special case for Small Island Developing States (SIDS) was first agreed to in 1992 and reconfirmed in Johannesburg in 2002. It acknowledged that the global blue print for SIDS remain the 1994 Barbados Programme of Action (BPOA) and the Mauritius Strategy for Further Implementation of BPOA.


On Brazil’s initiative to introduce a new text Saturday to resolve the contentious issues, Ambassador Beck was cautious with his response.


“I think there is a lot of good faith in this process. Brazil has assured everyone they will use what has been negotiated as a basis for negotiations. However, for me the key question is in the management of these negotiations by the host country.’


After a marathon round of informal sessions which spilled over into late Friday night, delegates were informed at midnight that Brazil will introduce a new text Saturday covering major contentious issues not favorably dealt with in the six months of PrepCom negotiations.
Despite assurances of transparency and inclusiveness in the process, some member states do not trust Brazil’s move.

By Friday evening, agreement on most of the thematic issues in the draft text had been ‘cleaned’ – according to Sha Zukang, the Secretary General of the Rio+20 conference.

“As we entered the final hours of negotiations, we have not reached where we want to be. We have two and half days to make come up with an agreement, the whole world is watching us.

“What is needed now is political leadership to steer the process forward, said Zukang, who is also the head of the United Nations Economic and Social Council Affairs (DESA).


Brazil now takes over the final leg of the Rio+20 negotiations – convening the first round of talks on Saturday (16 June).

“We will closely study the proposed text from the PrepCom and will propose a consolidated text in the hope a final draft will be ready for world leader by 18 June.


“We can’t play around with this deadline and I urge all delegates to complete all the work by Monday afternoon, said Brazil’s representative to the negotiations reiterated Friday night, said the Brazilian delegate at the last PrepCom plenary session.