"We have not lived up to so many of the commitments we made in 1992." - Solomon Islands Ambassador to the United Nations, Colin Beck. 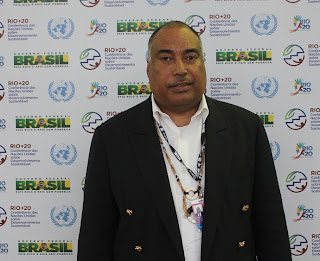 15 June 2012, Rio de Janeiro - As the clock winds down on the final day of prepratory negotiations, Solomon Islands' Ambassador to the United Nations, Collin Beck says positive progress has been made at Rio+20.

He spoke to Evan Wasuka about the developments during the last day of negotiations in Brazil.

BECK: The negotiations on this, the final day have picked up speed in such a way that there is now a sense of urgency amongst all the delegates. We are seeing brackets being closed on a number of issues, certainly on the issue of interest to Pacific countries, in terms of Climate Change and Oceans.

The most important issue that is still being discussed is the Means Of Implementation.

I think this is the heart and soul of everything that has been agreed otherwise, we can agree to do so many things but without technology transfer its not possible to do anything. That aspect they are now trying to find progress to address that. There are some proposals still being discussed, we still have a couple of hours to do that.

So far things are on track, but this is multilateral negotiations, it can look good but something else happens, all it needs is one state to be difficult on one issue and everything will collapse.

Everybody has come to the realisation that we need to do something, to know that failure, all the investment in talking will come to a waste.

The world is watching so everybody is trying to produce and be constructive. The unfortunate thing is that it’s happening on the final day of negotiations.

WASUKA: What's the mood like with Pacific members, how do they feel as the negotiations head towards closure?

BECK: Basically its cautious, while we have achieved certain, progress on important sectors, the whole document rests on strategic partnership.

If we don't get everybody onboard on all issues, then we are pushing ourselves to a point where our future is not that clear.

WASUKA: Pacific Island countries came to Rio with a number of issues, such as Oceans, special recognition for Small Islands Development States and Climate Change. Which of those have been accepted in the negotiations?

BECK: While we have achieved certain progress on important sectors, its better to see, the Rio outcome holistically rather than picking and choosing.

So far having achievements in focused areas, Pacific Small Islands Developing States have been pushing for to have stronger language is positive. But the work is not yet done. Even after all this investment if we still do not do much on trying to limit energy, or trying to limit deforestation then the ocean acidification will continue to increase.

WASUKA: Are you confident that it will be completed by today?

BECK: I feel positive that we are going in the right direction but I feel we need to go further. The biggest chapter of everything is the Means Of Implementation. Whatever we achieve in Oceans and other sectors, if there is no means of doing anything, there is no technology transfer, then it looks good on paper but it doesn't have any teeth.