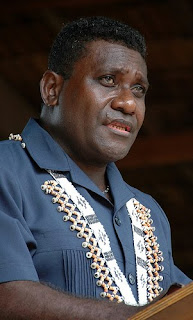 Sunday 13 December 2009, COPENHAGEN--As negotiations at the UN Climate Change talks enter their most critical phase this week, the head of the Solomon Islands delegation says he will deliver on the expectations of his people. Hours after arriving on a long haul flight from Solomon Islands –
Environment and Conservation Minister Gordon Darcy Lilo told his delegation members that he would do all he can to ensure that the goals of the government are met in the final week of talks.

“I will deliver on what is expected of me and support our people,”


said Darcy. Solomon Islands have been affected by rising sea levels with communities in areas such as Walade, Fanalei and Ontong Java sitting on the frontline of climate change. Throughout the past week of negotiations Solomon Islands has given its backing to a proposal by the Alliance of Small Island States, AOSIS. The proposal includes a seven year extension to the Kyoto Protocol, the establishment of a new protocol agreement and the reduction of emissions to keep global warming below 1.5 degrees celsius.
AOSIS wants these to be underpinned in a legally binding agreement. On Sunday night the minister was hosted at a dinner by the Solomon delegation, as leaders from around the world converged on Copenhagen for the final stage of negotiations. The minister said he was supported by a well resourced delegation, which also happened to be the biggest sent by Solomon Islands to any climate change talks. Lilo said he was now stepping up to the plate to ensure that their good work was continued into this final week of talks. He said Solomon Islands would continue to enter the negotiations in good faith. “The theme of this for us is survival – because if we don’t reduce emissions some of our islands will be underwater.” Lilo says the negotiations to set up an agreement on climate change have come a longway since the Bali Accord in 2007 and he hoped that leaders would come up with a deal at Copenhagen. With several drafts agreements on the table leaders this week will now have to choose one or settle on a compromise.--ENDS