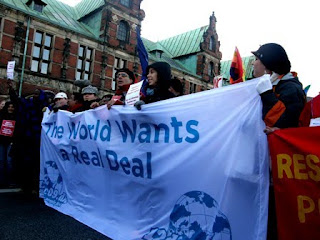 Copenhagen 14 December - As our Oceania people prepared for Sunday last weekend, thousands took to the streets of Copenhagen on their behalf, pressuring decision-makers to stop treating the planet as a business interest, to start looking at climate change as a moral issue.

The thousands marched for the planet and humanity who will be equally affected by the manifestations of global warming damage but in calling for a legally-binding agreement, those who braved the cold Scandinavian cold demanded the urgency a response to Pacific island communities’ required. 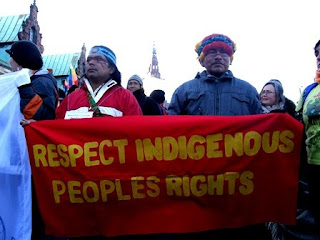 Walking the winding six kilometres aptly demonstrated that those who were there chose to be there to emphasise their belief that while the planet is very sick, leaders had ways of addressing it, thanks to science finally waking up to the realities of climate change, if they’d just stopped talking and started walking the talk.

The indigenous group lead the march. It did appear though that the indigenous population of the world comprised South American groups as they had sizeable delegation here. But I just couldn’t help imagining Fijian meke performers for instance prancing about or Tongan women with their ever-so graceful tau’olunga moves or i-Kiribati group garbed in their traditional: even if it was only for sometime before the cold would have definitely called for boots and coats. 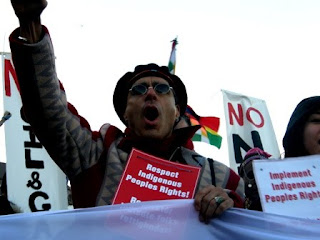 I wished for just a slice of Pagopago’s Festival of Arts for it would have been an invaluable show of what Pacific delegates are arguing here: that for us, it is not merely about rising sea-levels and inundation of atolls but as well, it is about the potential loss of culture that is rooted deeply into our definition of ‘land’ – land and ocean. One is comforted though by the fact that the Pacific island nations representatives are making waves where it matters – in plenary.

There was no shortage of placards pushing for equity and sincerity in humanity’s response to climate change – some read: ‘Blah Blah Blah...Action’ and/or ‘Change the politics, not the climate’ and/or a simple ‘CUT’. A personal favourite was ‘Stop Co2onisation’ in reference to the much touted REDD (Reducing Emissions from Deforestation and Degradation) mitigation programme that indigenous populations argue is inhumane for those who live close to or in forests. 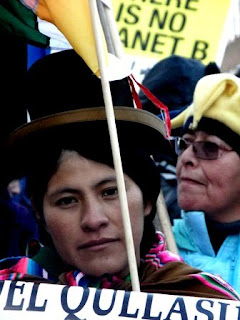 The diversity of this great big mass of people was mind-boggling, chants in different languages and just witnessing the different peoples that make up humanity was a feast for sore eyes. The police estimated 25,000 people.

Tutu then simply said to the absolute delight of the crowd: “Hello rich countries, wake up! It’s cheap to finance climate debt. 150 billion dollars a year would do it.” Tutu asked for a 40 percent reduction in greenhouse gases by 2050. Both de Boer and COP president Connie Hedegaard were also present. Hedegaard described the march as another demonstration that would make “negotiators aware of the high price of not reaching an agreement”.

Note: People took to the streets in Denmark and Sweden for a 6 km protest march calling for urgent action on climate change over the weekend - Saturday 12 December the march took place in Copenhagen with approx 50,000 people.  The second march took place on Sunday in Malmo, Sweden - Reporter Matelita Ragogo took part in the march on Sunday.