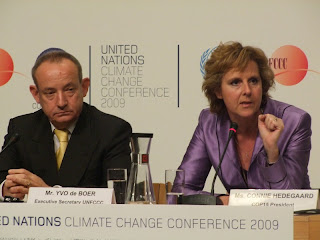 Copenhagen, 14 December -The President of COP15 has elected two co-chairs – one each from Germany and Indonesia to try and address major issues requiring political guidance.

These are issues dealing with the controversial long term ambitious global emissions reduction and enhanced action on mitigation and its associated means of implementation.

The United States and other Annex 1 countries have refused to move on the draft text, which demands legally binding mitigation commitments only from developed countries.

COP15 chair, Connie Hedegraad of Denmark called for informal consultations today after there was no movement on the issue of mitigation during the first informal rounds of negotiations on the draft text proposed the chair of the Ad Hoc Working Group on Long Term Co-operative Action (AWG-LCA), Michael Zammit Cutajar.

G77 and China were not very convinced with the President’s initiative to seek solutions through informal consultations.

“We were diverted by processes beyond our control, said Bernarditas Muller of Philippines, one of the official spokesperson for the G77 & China group.

“Our fear is that for the first time in the UN processes that ministers are doing the negotiations. A very vocal Ms Muller said her group has been pressured into ‘moving to the LCA processes, bypassing the Kyoto Protocol.’

We are worried that the presidency has been holding consultation in small group to try and move the negotiation process forward instead of consulting with all the parties.

“The pressure has been to divide developed and developing countries.

“They want to fast track us into the LCA process because all of it is self financing, the commercialisation of new technology and off course the push for mitigation by developing countries, said Ms Muller.

The COP chair wants political solutions to paragraph 3 & 4 and 11-19 of the AWG-LCA draft text, covering appropriate national mitigation commitments of developed countries.  Currently, figures in the text are shown  on brackets – meaning that there is not yet agreement on specific emission reduction targets. The draft states that emissions should be halved worldwide by 2050 compared to 1990 levels, but it also suggests at least 80 and 95 percent reductions by that year as possible alternative options. The other emission target is between 75-85 percent.

Developed countries are also concerned with paragraphs 5 & 39 on long term financing for adaptation and mitigation.  Its been whispered around the negotiation corridors that the Presidency wants to further reduce the seven page draft text to two pages, which may form the core of the new global agreement to combat climate change beyond 2012.