Copenhagen, 17 December- Fears of new vector born diseases are imminent in Samoa as a result of climate change.  Minister of Health, Hon. Gatoloai Amataga Gidlow said climate change will threaten not just the environment but the health of Samoans.

"There is a growing fear of the introduction of malaria as climate change worsens," she said.  Gatoloai was speaking at an event hosted by the World Health Organisation (WHO) to discuss the impacts of climate change on health at the United Nations Conference on Climate Change. 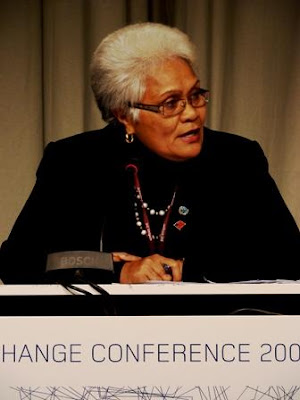 "I would like to highlight that like most developing island countries, we grapple with diseases such as dengue fever and typhoid, my fear of climate change is that these are going to be more common and prevalant."

Her fears of the introduction of new diseases and the increase in existing infections are shared by WHO.


Maria Neira, Director of Public Health and Environment says the impact on health is tremendous the world over.

"The human cost of climate change may be measured in the toll imposed by droughts, floods and heat-waves. The World Health Organization and climate change experts have warned of the adverse effects global warming has on air quality, food production, water availability and the distribution of infectious diseases."

For Samoa, fears of malaria are legitimate.

Caused by a parasite of the Plasmodium family, malaria is transmitted by the bite of a female anopheline mosquito.  The parasite infects human red blood cells, resulting in lysis of the red blood cell.  As the world heats up, ecosystems struggle to cope with the rapid ecological changes. Global warming trigger weather changes — which include but not limited to heatwaves and shift in wet and dry seasons of the Pacific.
Because the mosquitoes that carry the disease do not thrive in cooler climate some researchers have suggested a link between a rise in mosquito population and climatechange.  WHO suggests that a modest increase in temperature could lead to a population boom in mosquitoes and, therefore, malaria.

Gatoloai, Samoas Health Minister says Samoa cannot afford to have malaria or an increase of any other disease in the small island.

"We simply do not have enough Doctors and trained medical perssonal to cope with an influx in hospital admissions," she said.

Since 1988, the United Nations Intergovernmental Panel on Climate Change (IPCC) has reviewed scientific research in its most recent report, concluded that the average temperature of the earth's surface has risen by 0.6 °C since the late 1800s.  It is expected to increase by another 1.4–5.8 °C by the year 2100 – a rapid and profound change.  This according to WHO can only increase the threats on health.

Neira of WHO said: "Health systems have been protecting people from the hazards of weather and climate for years. Early warning systems, public education for behavioural change, disease control, disaster preparedness, mosquito control, food hygiene and inspection, nutritional supplementation, vaccines, primary and mentalhealth care, and training have been shown to reduce vulnerability to the effects of climate change."

Over 150,000 deaths annually are attributed to climate change, WHO says this number will no doubt increase with the rise in temperatures.