The Pacific in Durban - COP 17 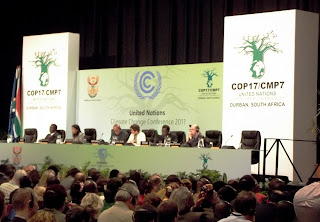 Seeking urgency and effective outcomes
Durban, South Africa, 28 November 2011 - At the forefront of climate change impacts, the vulnerable islands of the Pacific remain a critical influence at the 17th Conference of the Parties (COP17) that opened today in Durban, South Africa.
Some 20,000 delegates from around the world are attending the COP17 to the United Nations Framework Convention on Climate Change (UNFCCC).
Fourteen Pacific island countries are represented at COP17 under the banner of the Alliance of Small Island States (AOSIS) which is an intergovernmental organisation of low-lying coastal and small Island countries from around the world.
Pacific members of AOSIS include the Cook Islands, Fiji, Federated States of Micronesia, Kiribati, Marshall Islands, Nauru, Niue, Palau, Papua New Guinea, Samoa, Solomon Islands, Tonga, Tuvalu and Vanuatu.
“Climate Change will be the dominant feature of our future development, or our future demise,” said President of Kiribati, HE Anote Tong, from his island home of low-lying atolls struggling against the rising tides of the Pacific.
“I think a lot of countries do not understand that the impacts of Climate Change range over a very wide spectrum, from the most immediate and the most urgent, to those who do not feel it at the moment,” said President Tong.
“We are at the end of the spectrum which means that we are facing the problem today, yesterday, and our communities are being threatened.”
Financing – key issue for the Pacific
President Tong stressed that an agreement on financing in Durban will be vital for the Pacific.
“We must have that financing. I’m not raising the question of our future here because it’s virtually unthinkable. The problem is here - we are facing the problem today.”
Samoa’s ambassador to the United States, Aliioaiga Feturi Elisaia, echoed President Tong’s sentiments.
“We are at the frontline of the impacts of climate change in the Pacific, so for us it is not something that is theoretical,” said Ambassador Feturi.
“Our people are living through the real impacts of climate change –increased severity of tropical cyclones, significant coastal erosion, threats to fresh water supplies and food security.”
Ambassador Feturi was the Pacific representative on the Transitional Committee of the Green Climate Fund presenting its report on the design of the fund to COP17 for consideration. It is anticipated that the Green Climate Fund will channel a significant amount of the US$100 billion a year promised by developed countries by 2020 to help developing countries deal with Climate Change.
The UNFCCC COP 17 opened on 28 November and will close 9 December, for more information on this please visit: www.unfccc.int
No comments:

Gender talk at the Climate conference in Durban

Durban, South Africa, 28 November - The Pacific Gender Climate Coalition is bringing to the Climate Conference in Durban a message that gender responsiveness in any climate change work should be fundamental.
“Gender is not only about women but both men and women as we all have to respond to the impacts of climate change and for any project or activity addressing adaptation or mitigation must be gender responsive,” says Ms. Ulamila Wragg, the Pacific Coalition Coordinator.
“Apart from negotiations I am also hoping to forge partnerships that to further gender work in climate change adaptation and mitigation.”
She added that the Cook Islands now have a gender policy with Climate Change as one of its outputs and their Gender and Development Division has done a mapping on how these outputs should be furthered.
Wragg hopes to seek support to develop gender indicators to monitor the impacts of climate change and disaster preparedness on women and men, as well as build the capacity of institutions involved in Disaster Risk Management and Climate change to mainstream gender.
The United Nations Framework Convention on Climate Change COP 17 Meeting began today on 28th November and ends on 9th December bringing together over 20,000 delegates from around the world.
No comments: