28 May 2010 Bonn, Germany - A global, comprehensive and legally-binding agreement on climate change that was expected to have been finalised in Copenhagen in December last year is unlikely to be delivered at the next climate change conference as well.
The outgoing head of the UN Framework Convention on Climate Change (UNFCCC), Yvo de Boer said on Tuesday night that it was unrealistic to expect that the next Conference of Parties (CoP) to be held in Mexico in December this year, would be able to produce a legally-binding agreement.
He said such a full-fledged treaty would probably have to wait another year, till the next CoP in South Africa in 2011.
“I think developing countries especially would want to see what an agreement would entail for them before they are willing to turn it into a legally-binding treaty.
So I think if we are to get to a treaty, South Africa a year later is much more realistic,” de Boer said in a teleconference with journalists. 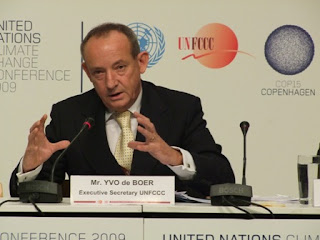 One of the divisive issues before climate change negotiators is the push by the United States and 20 other nations, mostly developed countries, to integrate the Copenhagen Accord into the negotiating text to be considered in the 12 days of talks in Bonn, Germany, beginning May 31.
Mr. de Boer had earlier indicated that the Accord, although not endorsed by all the UNFCCC’s 193 Parties, ‘should be included in the formal UN negotiations.”
The UN climate change chief, who will step down after the Bonn meeting to be replaced by Costa Rican diplomat Christiana Figueres, said the chair of the Long Term Co-operative Action (LCA) UN working group would table a "new text that integrates parts of the Copenhagen Accord", adding that the meeting could " significantly enhance that text".
The status of the Copenhagen Accord has been one of the main sticking points for the long-running negotiations since the end of the Copenhagen summit, with richer nations arguing that it provides a better framework for a binding deal than the existing Kyoto Protocol and poorer nations warning that any move away from the Kyoto Framework risks resulting in a weaker agreement.
De Boer said governments needed to "act now to develop greater clarity on the future of the Kyoto Protocol, since this cannot be left unattended until Cancun".
He reiterated his view that Cancun could deliver meaningful progress towards a binding international treaty, but only if rich nations provide evidence that they are making good on their commitment to provide $30bn of fast-track climate funding to poorer nations, and all countries deliver progress on emissions targets and the mechanisms for ensuring they are met.
He also warned that the Copenhagen Accord "set a political intent to keep temperature rises below two degrees Centigrade, yet existing industrial country pledges to cut emissions will not meet this goal".
De Boer’s comments came as one of China’s top climate change officials, Xie Zhenhua, confirmed for the first time that China is targeting the UN climate meeting in South Africa in late 2011 for the completion of any international treaty.
UN and EU officials have already signaled that they do not expect a deal to be finalised in Cancun, and Xie endorsed that view yesterday, confirming that the best that could be hoped for in Cancun was progress towards a deal.
Source: PACNEWS/INDIAN EXPRESS TIME/BUSINESS GREEN
Ms Komai will be covering the Bonn Climate Change negotiations from 31 May – 11 June 2010, thanks to support from Secretariat of the Pacific Regional Environment Programme (SPREP) and the World Wide Fund for Nature (WWF). She will provide daily coverage of the negotiations via PACNEWS and the SPREP website www.sprep.org and the climate pasifika blogspot, http://climatepasifika.blogspot.com