Durban, South Africa, 6 December 2011 - The Pacific nations did not come to Durban to fail.
This was the assertion made by the President of Nauru, H.E. Mr Sprent Dabwido, at the opening plenary of the High Level Segment of United Nations Climate Change Conference today in Durban, South Africa.
President Dabwido was speaking on behalf of the Pacific Small Island Developing States (SIDS), an informal grouping represented at the United Nations that includes Cook Islands, Fiji, Kiribati, Marshall Islands, Micronesia, Nauru, Niue, Palau, Papua New Guinea, Samoa, Solomon Islands, Tonga, Tuvalu and Vanuatu.
“Our conversation about climate change, and the challenge that addressing this growing crisis entails, has entered its third decade,” said President Dabwido.
“This audience is certainly aware of the worst consequences of inaction, though they are still worth repeating, so that we do not forget the magnitude of the task before us.”
Some 20,000 delegates, including seasoned international climate change negotiators from across the globe are in Durban this week for the UN Climate Change Conference. Outlooks have been mixed as negotiators stand their ground on key climate change issues.
“I am from the Pacific, and the 14 island nations in our group are often said to be on the “frontlines” of this struggle,” said President Dabwido.
“The combat metaphor is apt, because it is not an exaggeration to say that climate change is, for us, a matter of life and death.”
President Dabwido highlighted the plight of communities in Pacific islands that have been forced to flee their homes to escape rising seas.
“Unless bold action is taken, much of my region could be rendered uninhabitable within our grandchildren’s lifetimes.”
President Dabwido’s plea to COP17 was to firstly refocus the negotiations on mitigation and immediately begin a process to ratchet up the ambition of efforts to reduce greenhouse gas emissions to a level that ensures the viability and survival of all nations.
“Next, we must have a second commitment period of the Kyoto Protocol with an enhanced set of rules to strengthen its environmental integrity” said President Dabwido. “Some may think we have the luxury of waiting until we build a new regime. We do not. The Pacific most certainly does not.”
President Dabwido also called for a “Durban Mandate” for a new, legally binding protocol to complement Kyoto, with binding mitigation commitments for non-Kyoto Parties and mitigation actions for developing countries, as well as the conclusion of all other elements of the Bali Action Plan.
“Along-side these three key priorities, we must complete the work begun in Cancun, notably the Green Climate Fund, the Adaptation Committee, and the work programme on loss and damage.”
The UN Climate Change Conference concludes this Friday with high hopes for ongoing political momentum and concrete outcomes around climate change mitigation, adaptation and financing.
No comments:

﻿
Durban, South Africa, 5 December 2011 - “We are very grateful to the Global Environment Facility, the Australian Government, the United Nations Development Programme and the Secretariat of the Pacific Regional Environment Programme for the support that has especially been provided for the PACC Project.”
Speaking at the Pacific Adaptation to Climate Change Side Event during the 17th Conference of Parties in Durban, South Africa, the Minister of Environment for Tuvalu Hon. Apisai Ielemia expressed gratitude on behalf of his country and the Pacific region for the support given by the agencies in helping them adapt to the impacts of climate change.
“For us in the Pacific, the Small Island Developing States, climate change is strongly undermining our social and economic state, climate change threatens our source of livelihood and our very existence.
“The PACC funding comes from the Special Climate Change Fund (SCCF) of the GEF and it has helped the Pacific region move from assessments to capacity development and above all actual implementation on the ground.”
Tonga PACC National Coordinator Mr Paula Taufa said that through the PACC Project, the Hihifo community are able to address many of the challenges faced in their Water Resource Sector.
“With the PACC Project the reliability of the water supply will be significantly improved in six villages, the leakage ratio in pipelines will be reduced from the current 30-40 percentage range to 15 percentages, the salinity of underground water will be addressed and the efficiency of distribution of water will increased through this PACC Project.
“The adaptive capacity of the community will also increase and overall the water sector becomes more resilient to climate change.”
In the Solomon Islands, the PACC pilot site community has shown appreciation towards the options made available to them after consultation.
“In terms of food security, the community can identify problems and solutions to be implemented with the communities and climate change policy has been developed which has helped improve coordination of the project,” said Mr. Casper Supa, the National Coordinator from the Solomon Islands.
The National Management Unit in the Solomon Islands is using PACC to develop a longer term strategic and programmatic Vulnerability and Adaptation Plan for low lying atolls, and the lessons learnt contribute to the development of the national policy.
The Regional Project Management Unit continues to welcome other donors to use the PACC framework already in place in the member countries to carry out actual adaptation work on the ground.
“We have under the project fourteen Pacific Island Countries who are very new to the system, but we are building their capacity to take over the role of coordinating climate change adaptation efforts in their countries,” said Taito Nakalevu the PACC Project Manager.
“We have the PACC Project Framework to be able to deliver adaptation right down to the community level under the GEF UNDP funding and with AusAID now on board, and there are other donors that are welcomed to use this framework to carry out actual adaptation work on the ground.”
The PACC Project is implemented by UNDP in partnership with SPREP. It is funded by GEF and AusAID with support from the United Nations Institute of Training and Research.
No comments:

Negotiating for our Pacific survival

Durban, South Africa, 5 December - It’s within small, hot rooms sometimes with fewer chairs than there are people, that the fate of the Pacific islands is being negotiated this week.
The UN Climate Change Conference in Durban, South Africa enters week two with negotiations moving slowly and the challenges being difficult. The calls for urgency from the Alliance of Small Island States are either not being heard, or are ignored.
“We want to see something that will make sure that our islands, our people survive that the end goal is to keep global warming well below 1.5 degrees Celsius,” said Andrew Yatilman, Director of the Office of Environment and Emergency Management of the Federated States of Micronesia.
“What happens here in Durban is quite significant, if something actually happens here that would help prevent the negative climate change impacts to our vulnerable communities, it would save our people.”
The different negotiation themes are complex and web like with many different issues on the table, there is no one main meeting with one main battle.
For example some of the threads negotiated by AOSIS here is the call to operationalise the Green climate fund; ensure there is a second commitment period of the Kyoto Protocol and; have a clear agreement that there will be a new legally binding protocol to complement the Kyoto Protocol with binding mitigation commitments for non-Kyoto parties and mitigation actions for developing countries as well.
While the Pacific region may contribute to 0.03% of the World’s total greenhouse gases which lead to climate change, we are amongst the most vulnerable to the impacts of climate change.
﻿ ﻿
"Coastal erosion is a big deal for us in FSM,” said Yatilman.
The Federated States of Micronesia is made up of 607 islands which culminate in 4 states; Pohnpei, Kosrae, Chuuk, Yap that are home to a population of 110 thousand people.
“You can see some of our islands have infrastructure such as water tanks and some concrete structures that now sit in water, already useless. We have lost up to 10 meters to our shores in some areas with sea level rise. We are having more droughts that impact upon our farmers brining a loss of livelihood for them and we also sit in a typhoon belt which poses a destructive threat to us.”
Total annual emissions must be reduced to no more than 44 gigatonnes of carbon dioxide by 2020, and continue on a steep decline to keep warming well below 1.5 degrees. This is the temperature level that science has shown will help us avoid other devastating impacts. 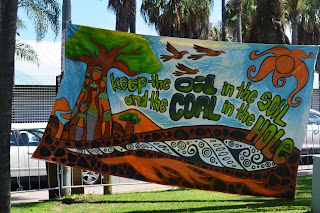 Last year total annual emissions pushed 48 gigatonnes of carbon dioxide, and even if countries meet the reduction targets they made last year at the 16th Conference of the Parties in Cancun, the world does not met the safe level of emissions, setting the stage for a temperature increase of 3 degrees or more.
Many Pacific communities are experiencing the impacts of climate change now, unless we can negotiate to achieve the AOSIS ‘asks’ here in Durban, South Africa, life will only get worse for Small Islands Developing States.
“We want urgent action, that is been what we have been after all this time but knowing that this is a multi-lateral process where you have over 190 parties at the table discussing coming to an agreement it’s not an easy process.”
No comments: