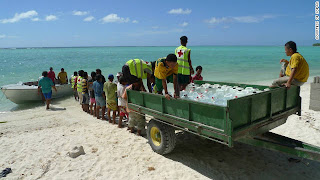 Source: CNN
"We have mobilized 2,000 collapsible water containers, hand sanitizers, tarpaulins to be used to capture rain (and) two emergency desalination units," Andrew McKie, New Zealand Red Cross International Operations and Emergency Manager said in a statement Tuesday.
The emergency desalinators are being sent south on a patrol boat at midnight Tuesday to the small atoll of Nukulaelae, part of Tuvalu, whose population of 330 is reported to be down to its last 60 liters of water. Schools have closed as residents conserve what little water they have and pray for rain.
"It's a pretty dire situation there," Gareth Smith, New Zealand High Commissioner to Tuvalu told Radio New Zealand. Smith is one of the two foreign ministry staff sent to Tuvalu this week.
In Nukulaelae, water is being rationed. Families - some with as many as 10 people - are forced to live on just 40 liters a day, according to Dave Hebblethwaite, a water management adviser from the Applied Geoscience and Technology Division of Secretariat of the Pacific Community.
"Families are getting by washing in the sea and only having a short wash in fresh water if at all," he said, adding that most of the fresh water is being reserved for drinking and cooking.
The Tuvalu government briefed a group known as the "Diplomatic Corps" Tuesday in the Fijian capital of Suva on the type of aid that might be needed. Delegates included head of foreign missions, international agencies and regional organizations. Parts for desalination units and fuel top the list, Hebblethwaite said.
Tuvalu, the world's fourth smallest country, is a nation of four reef islands and five atolls covering 26 square kilometers in the Pacific Ocean halfway between Hawaii and Australia.
The island nation relies almost exclusively on rainwater collected from the roofs of homes and government buildings to supply a population of 10,000. However, three dry spells over the last three years has gradually drained the community's water supplies.
"Communities in Tuvalu are pretty used to doing it tough," Hebblethwaite said. "Atoll environments are really hard environments to live in and when you're just relying on rainfall for all of your water, you find yourself in situations where you do need to make the most of every small amount.
"For these communities to be asking for external assistance, it shows that the situation is quite serious," he said.
New Zealand's Foreign Affairs Minister Murray McCully has warned the water crisis could lead to food shortages as crops fail.
"We're now doing an assessment, not just in Tuvalu but also in other areas of the Pacific that are affected by the shortage of rainfall, making sure we deal with the drinking water issue most urgently," he told Radio New Zealand.
Tuvalu imports the bulk of its food but its people also grow their own crops, mostly taro. The root vegetable is grown in pits filled with organic matter due to the lack of soil available on the atoll.
"We know that on some of the islands, particularly on Nukalaelae, many pits are suffering damage from either drying out or getting saline from the water table. So there's certainly an impact on food security," Hebblethwaite said.
"We're even finding that some fruit trees are suffering, even coconuts, which is unusual. Coconut palms on Nukalaelae are starting to lose their fronds," he said.
Tuvalu has been very vocal in its calls for international help to mitigate the effects of climate change. It has warned that it is in danger of "sinking" as sea water levels rise.
"The information we have about climate change and rainfall patterns is getting better and better every month," Hebblethwaite said. However he added that assessing long term trends on the islands was difficult to due the lack of rain gauges.
"One thing's for sure, water will be the main mechanism by which climate change impacts on these island communities, whether it be by droughts or by storms or floods," he said. "So building their resistance to today's climate variability that they're experiencing will be a key defense they can employ against the future impacts of climate change, and I think people are recognizing that."
No comments:

By Makereta Komai for Climate Pasifika in Panama
03 October 2011 Panama ---- Australia says it has disbursed more than a third of its fast start finance (FSF) since it was pledged in Copenhagen in 2009.
At an information sharing session here in Panama convened by the UN climate change secretariat, representative from donor and recipient countries shared lessons learnt from the disbursement of FSF finances set up to assist vulnerable nations adapt and mitigate against the impacts of climate change.
Both New Zealand and Australia revealed that more than 50 percent of their allocated FSF funds have been directed to small island developing countries in the Pacific.
In Copenhagen Australia pledged $599 million to the funds, which wealthy nations promised to give voluntarily to nations affected by climate change. 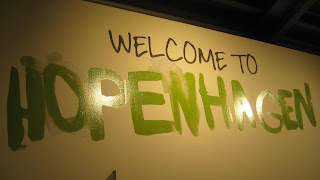 52 percent of its total commitment has been diverted to adaptation while the rest will go towards mitigation, said an Australian government representative on the panel discussion.
“Our pledge is grant based and has a strong focus on vulnerable and small island developing states and least developed countries.
“As of June this year a third of funds have been disbursed and another third by June 2012. By 30 June 2913, our pledged $599 million will be completely disbursed.
However, the Australia Government assured that fast start projects are long term engagements and will continue beyond 2013.
New Zealand on the other hand has disbursed its FSF funds through integrated projects in the Pacific region, which it says will benefits local communities.
“We find that good dialogue with partners and the local communities helps us to deliver quality climate change related projects to Pacific Island communities, said a New Zealand government official at the information sharing session.
However, the Alliance of Small Islands States (AOSIS), whose membership represents most of the vulnerable countries being target by donor funding like the FSF say they need more clarification on how the funds are being used.
AOSIS representative listed seven issues that it thinks needs more discussion with the FSF donors.
These are timely provision of information on funding opportunities, predictability of pledges, balance between adaptation and mitigation, prioritisation of funded projects, criteria to access funds, loans and grants and promises of new and additional funding.
In Copenhagen, industrialised nations pledged US$10 billion a year from 2010-2012 as fast start finance and jointly mobilise US$100 billion by 2020.
No comments: