By Makereta Komai, Climate Pasifika Media in Cancun, Mexico
07 DECEMBER 2010 CANCUN ---- The search for a common ground is now in earnest as climate negotiators race against time to conclude a negotiating text ready for ministers and leaders later in the week.
And, Mexico, as chair of the 16th Conference of the Parties (COP16) is exhausting all avenues to reach a compromise amongst Parties, with the hope of reaching a set of ‘balanced’ decisions at the end of the week.
In her effort to do so, COP16 chair , Patricia Espinosa has initiated a ‘pairing system’ between a developed and developing countries to further consult the views of parties on the two negotiating tracks currently on the table – long term co-operative action and the second commitment period to the Kyoto Protocol.
The chair of the Alliance of Small Island States (AOSIS), Grenada and Sweden will jointly consult on the long term shared vision, which covers the lowering of global temperature and the concentration of greenhouse gases (GHG) in the atmosphere and the peaking of global emissions.
AOSIS members, covering 43 nations in the Pacific, Caribbean and the Indian Ocean have been at forefront pushing for global temperatures to stabilise well below 1.5 degrees and GHG gases concentration level to 350 parts per million.
“A 2 degrees increase will have devastating consequences on small island developing states resulting to sea level rise, coral bleaching, increased incidence of climate change related diseases and increasingly frequent and severe weather events, says the AOSIS position paper.
AOSIS feels that Parties must commit to ambitious target to reflect their endeavours consistent with a mitigation pathway that safeguards the survival of vulnerable nations.
The small island nations hope their ambitious targets will be conveyed in the consultations and reflected in the negotiating text to go before ministers and leaders.
Spain and Algeria will lead consultations on adaptation, Australia and Bangladesh on finance, technology and capacity building, New Zealand and Indonesia on mitigation and United Kingdom and Brazil on matters relating to the Kyoto Protocol.
“Ministers will not be expected to draft compromise language, but to help identify where balance is to be found, said Espinosa. 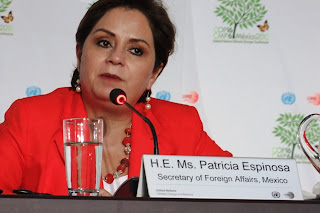 In addition, the ministerial pair will not convene informal sessions but will instead approach every delegation they believe ought to be consulted at each specific moment and remain accessible to all.
“Ministers will not limit their contacts to other ministers, but will be open to dialogue with all and they will reach out to the representatives that each party has decided to appoint, added Espinosa.
Espinosa said the engagement of ministers in the process is necessary to give political guidance to push forward several key issues.
“One week into the process, the conditions are in place to reach a broad and balanced package of decisions that leads to an era of increasingly effective global action on climate change. We must continue working with a renewed sense of urgency. I believe we can complete the package, or at the very least to make significant advances, before the opening of the high-level segment on Tuesday afternoon, said Espinosa.
“The process we have identified seeks to simultaneously take advantage of the positive results ministerial participation can bring and of the inclusiveness and technical capacity that the formal negotiating environment can provide.
“I am optimistic that we will move forward very quickly in the next two days. I will fulfil my responsibility of closely monitoring the state of our discussions and proposing the further steps that might be required so that we can reach our goals.
European Commissioner for climate change, Connie Hedegraad welcomed the Mexico’s initiative to pair up ministers to identify areas of compromise. 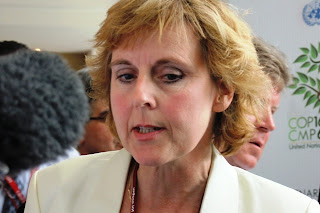 “It’s time to start tackling the key political questions, which emerged from the technical discussions last week. That is where the ministers can and should be a real asset.
“At the same time we are still concerned that the text is not ready to be used by ministers this week. There are still too long with too many options and much too complicated. This is the challenge for the next 24-48 hours.
“We have to seek compromise in the coming two days and I hope that ministers and leaders that are still on their way will bring compromise in their luggage for Cancun, said Hedegraad, who chaired COP15 in Copenhagen last year.
United States special envoy on climate change, Todd Stern, in his first appearance before the international media here in Cancun had only one message, ‘The United States will only move if there is a genuine and balance package across all key issues. This is the key to unlock an agreement.
Before leaving for Cancun, Stern made a similar comment to the foreign press in Washington.
"I actually think we're either going to see progress across the range of issues or we're not going to see much progress."
The U.S argues that all the components of the package need to move forward together, or else nothing is going to move.
The criteria, according to the UK’s Guardian newspaper includes: developing nations committing to emissions cuts and the establishment of a verifiable system of accounting for these cuts. If these features were included in a treaty, the United States would agree to the provisions that are important to emerging economies such as climate finance, technology sharing, and deforestation.
No comments: