29 November 2010, Cancun – A group of Pacific small island developing states (Pacific SIDS), among the most vulnerable countries to climate change, challenged other nations to raise their expectations for the negotiations that began in Cancun today.
Andrew Yatilman, Head of delegation for the Federated States of Micronesia, spoke on behalf of the Pacific SIDS. “While the politics of climate change may have shifted in the year since the world last met in Copenhagen, the dangers of life in a warming world are no less real. We must raise, not lower our expectations for Cancun.”
Yatilman delivered his statement on day one of the negotiations, where the Pacific SIDS are insisting on progress in a number of key areas that would set the stage for a planet-saving agreement to be signed in South Africa next year.
“Make no mistake, what happens in Cancun matters. That is why many of our Heads of State, Heads of Government, and ministers are returning this year to COP16 – to finish what we set out to do in Copenhagen and preserve a future for our people and our countries,” said Yatilman.
“First, the Pacific SIDS, as members of AOSIS, have consistently called for limiting the rise in average global temperature to well below 1.5 degrees to avoid the worst impacts of climate change and provide a reasonable opportunity for the survival of all our island nations.”
“A recently released UNEP report confirmed that there remains a wide gap between the emissions reduction pledges on the table and what is needed to achieve this goal. These pledges would likely take the world beyond 3 degrees – a reality that would leave many of our islands, and indeed entire island nations, uninhabitable. We must establish a process here in Cancun to reach agreement on targets, using the survival of small island nations as a minimum benchmark.
“Second, the agreements reached in Cancun must be a stepping stone towards a legally binding agreement that is needed to lock in the emissions cuts and other measures needed to protect the future of our islands. The stakes are too high for all players to rely on voluntary arrangements.”
“Third, our region faces enormous hurdles implementing adaptation programmes, and urgently needs the support of the international community in the areas of finance, capacity building, and technology transfer. It is essential that we establish a new global climate change fund that provides streamlined access that takes into account the special circumstances of SIDS and LDCs, so that our people can see concrete results in their communities.”
Speaking in relation to the Kyoto Protocol, Ambassador Donald Kalpokas, Permanent Representative of Vanuatu to the United Nations emphasised the following:
“We must reach a conclusion to the Kyoto Protocol negotiations to avoid a gap between the first and second commitment periods. The Kyoto Protocol is the lynchpin of the international legal regime for responding to the climate crisis and a gap in commitment period would seriously undermine our ability to respond effectively.”
Pacific negotiators met prior to the COP to discuss priority issues for their islands and coordinate their negotiating strategy.
Heads of state and government from the Pacific island nations of Kiribati, Nauru, Palau, Papua New Guinea, Samoa and Vanuatu will be attending the Cancun meeting during the second week of negotiations to provide the high level political guidance needed to ensure a robust outcome.
For more information or for comment, please contact Michael Crocker in Cancun at 9982243678 or by email press@pacificsids.org


Full statements as per below - please click on the images to read: 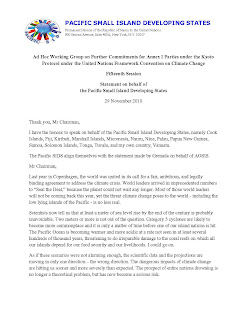 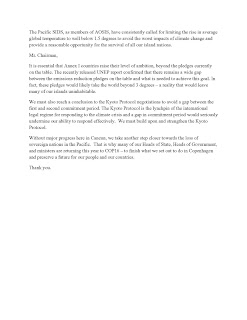 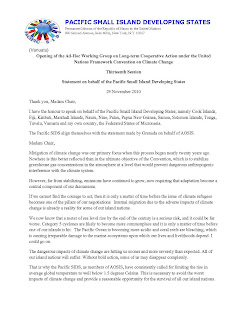 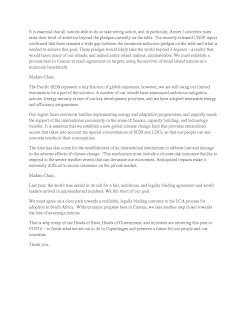