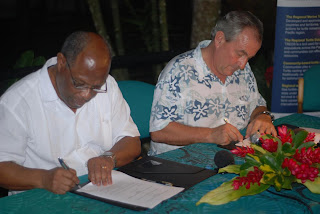 Apia, Samoa - A memorandum of understanding has been signed between the Secretariat of the Pacific Regional Environment Program (SPREP) and the Caribbean Community Climate Change Centre (5C’s).
The agreement which was described as the first was signed at the end of the four day Lessons for Future Action Conference in Apia, Samoa.
The signing ceremony was held at the SPREP headquarters and the agreement was signed by the SPREP Director David Sheppard and the 5Cs Executive Director Dr Kenrick Leslie.
Speaking at the signing ceremony, Mr Sheppard said both the Pacific and the Caribbean have long agreed that better collaboration is necessary, but concrete action to match the aim has been very limited.
“The MOU will greatly accelerate this process and will enable us to concretely follow up the recommendations of this week’s conference.”
Mr Sheppard said SPREP was honored to be associated with the 5Cs and noted it is the leading organization in the Caribbean region for climate change, and also a major source of policy advice and guidelines to the Caribbean Community and its member states.
The Director said partnership between the two agencies will be greatly strengthened as a result of the MOU signing today, and the people and governments of both organisations stand to benefit a lot from the synergies and cooperation under the agreement.
Meanwhile speaking to Solomon Islands Broadcasting Corporation (SIBC) News after the signing, the Director General of the 5Cs Dr Kenrick Leslie said the agreement was an important and an exciting one which brings together the Caribbean and the Pacific region.
“SPREP is a much older institution, and it is doing work in certain areas that we are not at this moment and therefore we want to take the advantage of using their expertise in guiding us in areas we are not at the moment and vice versa – we are doing work in certain areas they are not working on, so we can share with them, said Dr Leslie.
Also under the agreement the Caribbean will for the first time have a joint and side event sponsored by SPREP at the upcoming Conference of the Parties dealing with Climate Change meeting later this year in Durban, South Africa.
Dr Leslie says this will give the Caribbean a greater voice at the upcoming Durban conference (United Nations Framework to the Convention on Climate Change Conference of the Parties in Durban at the end of the year).﻿